I have been an ABE bookseller for a long while, and my sales there have been consistently good but a mite slow for my pecuniary needs these days; those hospital bills are monsters! So, in my first round of trying to raise cash I'm making a special offer to you blog readers. My ABE prices are already quite low, but I've taken all my inventory off there and I'm offering everything to you at 50% off my ABE prices (in many cases, less than I paid). To see the list of over 1000 titles follow this link.

My specialties on ABE are newspaper bound volumes, sci-fi pulps, vintage fiction and lots of miscellaneous good non-fiction. You'll find some books related to cartooning as well, but they were never my focus on ABE. The list, I'm sorry to say, is unsorted (well, it's sorted by title) but hopefully that will make the hunt that much more fun.

Note that the prices you'll see on the books are the ABE prices. When you order everything will be 50% off. My shipping rates and payment options are listed at the top of the sales list. If you have any questions or want to place an order you'll find all my contact information there. 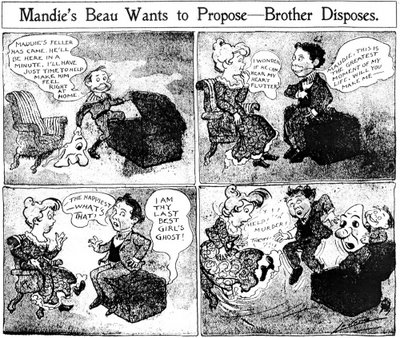 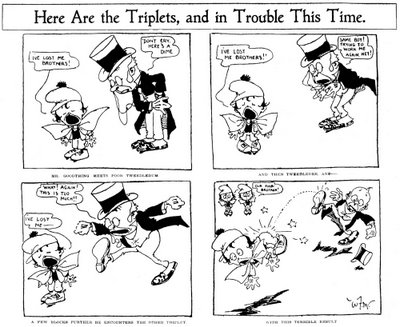 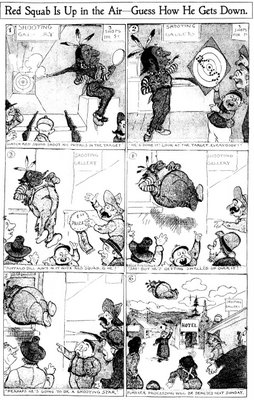 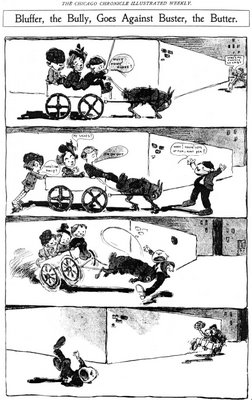 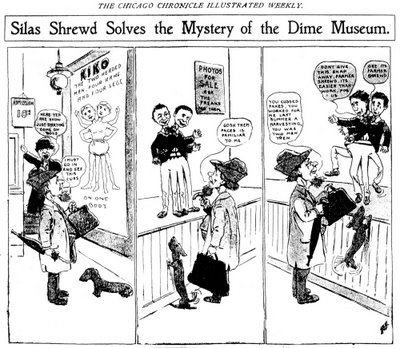 Here's another pair of the Chronicle's Sunday comics. Silas Shrewd was by C.E. Ashbrook and Bluffer The Bully was by Fred Lewis. The Bluffer gag is micron thin, but what a wonderful art style! Too bad this Lewis fellow apparently didn't continue his cartooning career (leastways I've never heard of him).

From my thin sampling of sections, both Silas Shrewd and Bluffer The Bully ran on 3/15 and 3/22.

Not my aera of expertise, but I am glad to have you back. 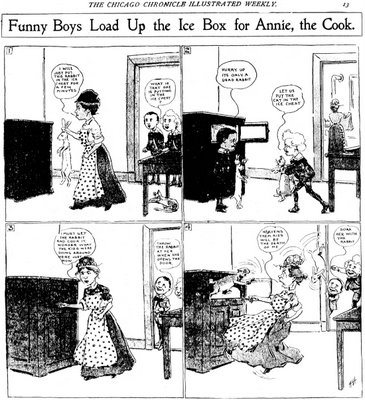 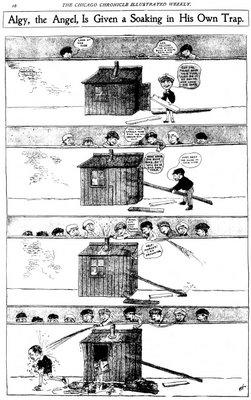 Thanks very much to those of you who sent replies and emails of encouragement. It meant a lot to me that you took a few moments to write words of encouragement to a person many of you know only through a blog.

To bring you up to date, Judy's operation was a success and she is recuperating quickly, up and about and in great spirits. However, she is also going to need months of follow-up treatment.

I apologize for being obscure about her situation. This is necessary because Judy and I are self-employed in a business in which our customers depend on our being available to help them. If they get the idea that Judy's health issues might cause us to close or curtail our business (which is NOT the case), some of them may well decide to get proactive and jump ship. That we definitely can't afford, especially considering the humongous medical bills that we now have to pay.

Of course I don't tell our customers about my blog, which has no relation to our business, but I suspect that some of them might chance upon it by Googling my name. I have, in fact, received a few phone calls from customers who acted a bit odd, as if they were aware that something was up. Maybe I'm just being paranoid, but better safe than sorry. If any of you want specific information, feel free to email me.

Anyhow, about the blog. This summer is going to be very hectic; beyond business and Judy's treatments, we are also in the middle of a big development project for the business, and I'll be using much of my free time to post a lot of comics material on eBay to help raise money for our astronomical medical bills. This leaves little time for blogging, so I'm going to play it by ear. From what I've heard, many of you have RSS feeds or other methods to know when the blog is updated, so until things calm down around here I'm just going to post when I have something that I really want to share. In addition, I'll be posting notifications on the blog whenever I put items on eBay. Don't let my medical bills influence your bidding, he said, laying on the guilt trip ;-)

A little alarmed that you got a real
job. I thought all you comic historians
were independently wealthy :)

Anyway, while we'll miss the daily
postings rest assured that we all
know where your priorities should be.

Take care of her!!