This neat ad shows vignettes of various ad strips created by comic strip cartoonists. I can identify all but the one with the elephants. Is it Lyman Young's Tim Tyler? I'm not sure. 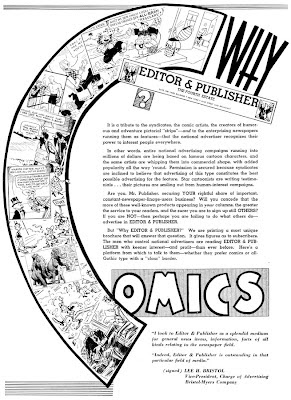 1/6/40
Walter W. Blackman, 65, for 21years political cartoonist for the Birmingham (Ala.) Age-Herald, before going to Cleveland 16 years ago joining McNitt's, an engraving firm, died Dec. 29 at his home in Willowick, a Cleveland suburb. He started his career as a newspaper boy and later became political cartoonist. He was the originator of one of the first animated motion picture cartoons. He also held the patent for a process to take motion picture in natural color, long before the advent of technicolor. He was a member of the Gridiron and the National Press Clubs of Washington, where he was regarded as an authority on political economy.

1/27/40
Clarence "Cad" Brand, 71, veteran Milwaukee newspaperman who began his career as a cartoonist for the Milwaukee Sentinel in 1900, died recently. On the Sentinel he first specialized in political cartoons but later began to draw the sports cartoons for which he was best and widely known. He signed his work "Cad." After fracturing his arm in 1937, he retired.