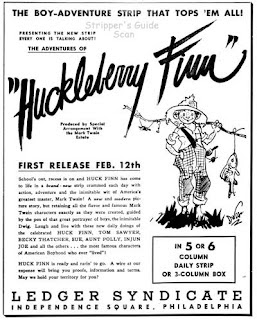 Ledger Signs "Huck" Finn
1/13/40
"Huckleberry Finn," a new comic strip available also as a three-column box, and which was created by special permission of the Mark Twain estate, was announced in Philadelphia this week by George Kearney, manager of the Ledger Syndicate. Publication is scheduled for Feb. 12.

Drawn by Clare Dwiggins ("Dwig") veteran cartoonist and one-time collaborator with Mark Twain's official biographer, the strip is the first which features "Huck" Finn in the hero's role. "Dwig" is famous for his drawings of kids-boys and girls and dogs and cats and all they do.

"The strip is light continuity, plus humor, depicting the new daily adventures of 'Huck,' " said Mr. Kearney. "These adventures are based on the situations and stories written by Mark Twain.

"All the famous Twain characters are depicted in the strip, including Miss Watson, Aunt Polly, Tom Sawyer, Becky Thatcher, Sue, Injun Joe, Old Pete and many others. It is packed with human boy adventures, spiced with the inimitable humor of Mark Twain."

How A Hobby Became A Feature Is Told
By Stephen J. Monchak 3/30/40
How the musty manuscripts of an old-time reporter, who collected interesting court cases as the basis for short stories and plays, led to development of the present adventure strip, "You Be the Judge," was related to Editor & Publisher recently by Carlile Crutcher, assistant to the publisher of the Louisville Courier-Journal and Times and president of Carlile Crutcher Syndicate.

Mr. Crutcher first became interested in newspaper syndication when he developed a series of articles on freak patents. The stories created so much interest in the Courier-Journal that he arranged to syndicate them to other papers. He then learned that L. Allen Heine, now author of "You Be the Judge" series, had in his possession a trunk full of manuscripts dealing with unusual law cases.

Now Sold to 87 Papers
The manuscripts were written in long hand by the late William Lanahan, a former Louisville reporter who became an itinerant newspaperman. Lanahan not only worked on newspapers in this country but abroad. He made a hobby of collecting tricky court cases. When he died he willed his possessions, including the manuscripts, to Mr. Heine.
Mr. Crutcher conceived the idea of a panel strip that would tell the story in pictures and a small amount of text. Mr. Heine began briefing the Lanahan manuscripts so the cases could be condensed into a six-day picture serial. Robert Wathen was employed as the artist to illustrate the feature.

Today, the Crutcher Syndicate sells the feature to 87 newspapers, including Spanish, Portuguese and French translations for foreign language papers. In order to get fresh material, Mr. Heine reads law cases continually and each 100 cases usually nets one suit that lends itself to dramatization.

The series is based entirely on actual legal suits, although names are changed. The syndicate offers to furnish citations of the cases, upon request of readers. Many lawyers write. (Allan's note: this strip is more widely known as Bela Lanan, Court Reporter) 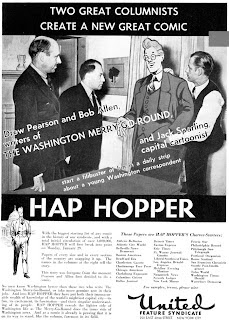 UFS Comic Strip Renamed
1/13/40
It appears there's a Washington correspondent for King Features Syndicate called Jack Hazard and he felt it would be embarrassing to him if United Feature Syndicate's new comic strip about a Washington newspaper man called "Hap Hazard," would be syndicated nationally in view of the similarity in names and locale. So UFS this week told this column that the strip's name would be changed to "Hap Hopper."

The strip, scheduled for release around Feb. 1, was created by the "Washington Merry-Go-Round" columnists, Drew Pearson and Robert S. Allen. It is drawn by Jack Sparling, a former staff cartoonist for the Washington (D. C.) Herald.

Comments:
Hello, I am interested in collecting anything by Dwig as I am also a Dwiggins and related to Clare and W.A. Dwiggins. If anyone has original comic strips or anything done by Clare, please email me at britchason@hotmail.com
Thanks very much!
Beth (Dwiggins) Ritchason