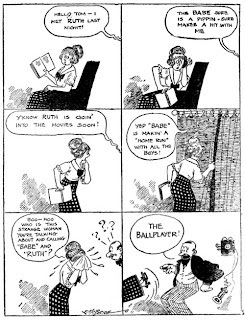 All cartoonists who have passed thru the formative and lean period feel a sense of responsibility to the youngster who would make good, but it is unfortunate that so few of them are ready to take the advice we pass along to them out of the fullness of bitter experience. They would have a fuller appreciation of what we tell them if they would stop to realize that possibly 75,000,000 of the population of the United States decided at some period in life that he or she would be a cartoonist, a very successful cartoonist in fact - and there are less than fifty outstanding cartoonists in the country today. Hardly a day passes that I do not cheerfully make an effort to set seven or eight youngsters on the right road, but very rarely do they heed my advice.

They call at my office in the New York Herald Tribune Syndicate, exhibit their drawings, and, I am sure, many of them go away offended when I tell them very frankly that they lack ability for cartooning.

Sometimes I see the possibility of development in amateur work. When the man with a new idea appears or even a new angle of an old idea, it's the business of the syndicate manager to gather him into his particular fold and do it as quickly as possible.

Readers of Cartoons magazine are familiar with the recent case of a young man who reached the New York canyons with an idea and a new and fetching technique. The first syndicate office in which he showed his stuff wouldn't allow him out of the place until he had signed a contract - and a very good one. Any of the live syndicates would have done the identical thing. 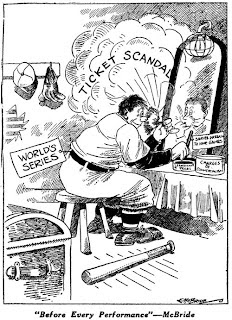 A cartoonist's work must sell itself or it has no market value. This particular young man had the goods. Within forty-eight hours after he signed his contract, the syndicate had sold his stuff to a great New York newspaper, operating a very successful and progressive syndicate of its own.

The point I wish to make is that the market is always open - a generous market, for the goods that sell themselves. Once the strip or the cartoon is launched, it must build up its own audience; if it fails to do that, it is hopeless from the viewpoint of the syndicate.

Strips must make money before we can pay for them. The usual contract system now provides for a guarantee and a 50-50 basis on everything over a certain amount. One organization has inserted a clause in its contract providing for registration, in the name of the syndicate of the strip name in the United States Patent office, the result being rather disastrous to the worker who wishes to withdraw from the employment, as his brain-child continues with his boss.

These things, however, deal more generally with the man who has arrived. To youngsters who have talent, I have only to say: You must work - you must accept council and advice - enrollment in a good school will help. Above all, work in the art department of some newspaper. This is the apprenticeship you must serve, cheerfully and hopefully, if you would succeed. At the start of my own career it took some time to decide whether I should become a jockey, a violinist, a trick bicycle rider or a cartoonist. After winning the cover design prize at school in my native St. Louis for the Louisiana Purchase Essay Book to be exhibited at the 1904 World's Fair, I decided to study art. At the St. Louis School of Fine Arts, where I studied, I discovered that every member of the class wanted to be a newspaper artist. Acting on this provocation, I quit the class and got a job at $4.00 a week on the St. Louis Republic, taking private instruction from Paul F. Berdanier, the famous St. Louis illustrator, in the evenings.

The Republic job consisted in helping the benday man, filing pictures, making borders, and carrying the photographer's tripods to the baseball park. (I suppose I lacked the proper experience to carry the cameras.) They were lean days but they meant a lot in making whatever success I have had.

The national Republican and Democratic Conventions in 1908 and 1912 found me active in the political cartoon field. The "hound pup'" with which I signed my cartoons during the Champ Clark Campaign for the Presidency attained national size as the campaign "Houn' Dawg."

My "Col. Bugg" and "Mayor Wise" ran for three years in St. Louis. I came to the New York field with the Evening World in 1913, where I created "You Gotta Do It" and "Putting It Over." Went to the New York Evening Sun in 1915 as art manager, handling the work of the late Robert Carter, Larry Semon (now of movie fame) and MacGill and his "Hallroom Boys."

The nature of my position has necessitated my keeping in touch with every advance in the fields of engraving, color work, photography and all newspaper reproduction process. I have been helped in keeping the wolf from the door by making most of the sport comics used by A. G. Spalding, the sporting goods man, during the past eight years. My hobbies are music, books, newspapers and airplaning.

(Allan's note: Eddie's strips at the NY World were all short-running, the longest lasted just four months. His work at the St. Louis Republic (Colonel Bugg and Mayor Wise) I have not been able to document.)

Comments:
Two questions Allan,
Any guess as to the cartoonist held hostage until he signed a contract?
and
McBride makes it sound unusual that a syndicate would copyright a work in their name, but I thought that, with maybe John Wheeler excepted, was standard operating procedure?

Allan, Do you have any examples of Larry Semon's work for the New York Evening Sun in 1915? I'm curious about what sort of cartoonist this wild silent film comedian was.

DD - Sorry, don't know which cartoonist McBride is referring to. If he would have only given the syndicate we might be able to take an educated guess, but he's playing too close to the chest.

As for copyrights, I agree that it seems to have been pretty standard practice. I kinda wonder if McBride was misinformed and it was more that the H-T was more liberal than usual in that regard.

Mark - I don't have any of Semon's Sun work -- Jeffrey Lindenblatt indexed that paper and didn't report any continuing series by him. Perhaps he just did miscellaneous gag stuff for them. I do have samples of his extensive work for the Evening Telegram, though, and it will pop up as an obscurity one of these days. Be prepared, though, whatever his abilities on film, Semon was not much of a cartoonist.

Can you provide a detailed source citation for "Syndicate Stuff" by Eddie McBride, Cartoons and Movies Magazine, 1925? I'd be interested in date and page number so that I can track down the article to use with McBride cartoons.

Thanks for the added information!