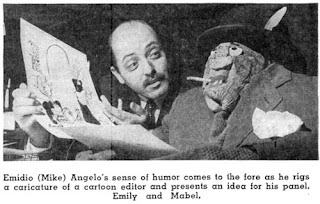 Philadelphia — Believing the comics were getting too serious, Emidio (Mike) Angelo, a car­toonist for the Philadelphia In­quirer, launched a panel in 1945 about two pleasant maiden ladies who are generally look­ing for a man.

Emily and Mabel haven't found one. But they've suc­ceeded in landing readers. And beginning March 6, the pair who have appeared three times a week in "Funny Angles," dis­tributed by the Chicago Sun-Times Syndicate, will play six-a-week roles and snatch the billing.

When the cartoonist was struggling to make enough money to go to art school, he once worked at a drugstore soda fountain. Two maiden ladies had charge of the candy counter in the same store. "Years later," said Mr. An­gelo, "their features and man­nerisms remained in my sub­conscious mind. An artist still gets his best ideas that way. When I first created Emily and Mabel, I could not immediately identify them with the real women who worked in the store when I was a young man.

"But as I developed the panels, I began to realize those two kind souls were really my inspiration. I still stick to a very simple idea—two lovable spinsters who realized late in life that they missed something and are generally looking for a man."

Mr. Angelo's own success as a newspaper cartoonist did not come early. Son of an Italian immigrant, he worked his way through several art schools after a few months in the art depart­ment of the old Philadelphia North American in 1918.

His ambition was to become a painter. He won two Cresson scholarships for study in Eu­rope in 1927 and 1928 from the Pennsylvania Academy of Fine Arts. He became interested in cartooning because he said he "had to eat," and painting com­missions were slow. When checks for some of his drawings arrived from national publications, he decided to de­vote more time to that art. Still free-lancing, Mr. Angelo started to do some work for Philadel­phia Ledger in 1930, but his real "discovery" as a newspaper car­toonist came with the Inquirer, under the direction of E. B. (Tommy) Thompson, assistant managing editor and feature ed­itor.

During the dark days of war, Mr. Thompson asked Mr. An­gelo to create a general panel which would "give people a laugh." Mr. Angelo had joined the Inquirer in 1938 and his work included the Uncle Dominick cartoon for John Cummings' column. Being by nature a man who laughs a lot himself and gets a kick out of bringing a smile to others, Mr. Angelo did not need much prodding from Mr. Thompson to launch his new feature. He started a general panel called, "Funny Angles." Occa­sionally, the two spinsters would appear, but they were so good, Mr. Thompson said, that it was decided to run Emily and Mabel three times a week.

Mr. Angelo received national recognition after Harry Baker, general manager of the Chicago Sun-Time Syndicate, saw some of his original drawings while visiting Mr. Thompson on some other business. The panel was syndicated. 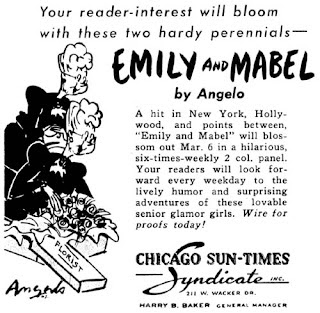 Mr. Angelo thinks up gags himself but also employs a gag man, Vincent Schiller, an em­ployee of the Inquirer library. Mr. Schiller's regular job is to clip many newspapers and the situation is ideal for getting background for gags.

Mr. Angelo is proud of the fact that President Truman re­quested an original of one of his cartoons. It was done for "Funny Angles" right after Mr. Truman's widely-quoted S.O.B. speech. The drawing shows a mother washing her son's mouth with soap as the father comes home. The gag says: "Ever since you told him he might be President someday, he's been using that language."

"It's a wonderful country," said Mr. Angelo, "when you can poke good-natured fun at the President and he requests a copy of the drawing to hang in his office."

Mr. Angelo likes to watch people reading his panels in trolley cars and subways. He says that when they smile over Emily and Mabel he feels good. He maintains a studio in his suburban home as well as shar­ing an office at the Inquirer with Foreign Correspondent Ivan H. Peterman. Mr. Angelo is married and has two daugh­ters, aged 10 and 5. Both, he says, have artistic ability.