News of Yore: Profile of the Baers 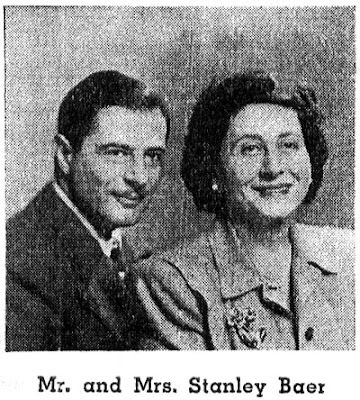 For some artists and some writers creating a successful comic strip is a lifetime ambition, but the Baers — Stanley and Betsy — broke most of the rules. Family teams are unusual but the Baers achieved a unique twist by not getting the comic bug until they had been 14 years married. Art or writing are the usual backgrounds for venturing into the field but Stanley went into comics from the wholesale grocery business and both Baers named as their chief preparation "raising a family."

Finally, one successful comic strip is usually enough for anyone but the Baers had barely launched "The Toodles" in the brand new Chicago Sun before Mrs. Baer's father died and her mother asked the couple to take over production of the Bell Syndicate daily and Sunday comic "The Nebbs," and the Sunday strip, "Simp O'Dill."

In New York this week to celebrate their 20th wedding anniversary, the "Chicago Baers" were commemorating also the fifth anniversary of their sudden arrival as wholesale comic producers.

The Baers tried out the new field on a dare. On a visit to Mrs. Baer's father, Sol Hess, they were discussing for the umpteenth time "The Nebbs," which Hess originated and wrote and which still carries his by-line. "If you know so much about comics, why don't you start one?' demanded Hess of the Baers. They demurred.

""You haven't got the guts," Hess charged. That dare was all we needed." Stanley Baer told E&P. The two set to work on a script. They decided that most comic strip parents were old-fashioned; so they would do a modern couple, and for children would capitalize on the universal appeal of twins. Next they ran a want ad for an artist and got 125 answers, tried out the 25 applicants whose letters sounded most promising — and were still without an artist until an ad agency friend told them of Rod Ruth who wanted to work on a comic.

Sol Hess didn't think too highly of the strip's chances, but a month before his death the Baers were able to tell him the strip was starting shortly in the Chicago Sun and its syndicate.

Then, at Mrs. Hess' request, they took over production of "The Nebbs." More recently they began to make some changes. Since the continuity of that comic had tended to deal more and more with oldsters, the younger Baers felt that the readership was growing older all the time.

"We were wracking our brains how to get young characters in," Betsy Baer explained. "When Dad did the strip, he had had Betsy Nebb, the daughter, and Junior, the son, but he made the mistake of marrying Betsy off so she wasn't a Nebb. And he didn't grow his characters up though he was the one who suggested that Frank King grow Skeezix up.

"So we contrived the cousin, Willie Nebb, who never took money from anyone, and his wife, who thinks Willie can do anything, and their children. It helped our Sundays bringing Willie in, and we made Junior grow so that we have all ages now."

The two sets of comics are so different to the Baers that they have no trouble keeping the problems of each separate, but they no longer sit around looking at each other and trying to squeeze out an idea for the one they are working on. They sleep on it.

Stanley is the idea man of the team and when a thought strikes him — perhaps while he goes about his wholesale grocery business — he heads for the nearest phone. Betsy writes the script, including suggestions to the artist, then Stanley reads it to himself. (They found Betsy's voice would color it if she read it aloud to him.) They check "The Nebbs" and "The Toodles" balloons again after Wally Carlson and Rod Ruth, respectively, have finished their art.