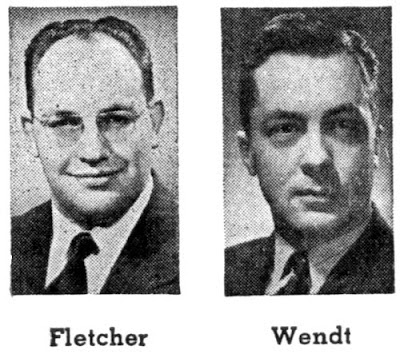 Months of research were needed before Jed Cooper could return from an Indian campaign to his home town, Philadelphia. Months more will be required before Jed goes to Colonial New York and Boston, they say. The collaborators, co-workers at the Chicago Tribune, chose the early American scene for their strip to accent the inspi­ration in stories of American beginnings.

But both are qualified to produce the four-color comic about a rugged young scout and his French-Canadian friend, Jacques Pierrot. Mr. Wendt did his MS thesis on Colonial history while at Northwestern. Mr. Fletcher, a canoeist and judo expert, has a hobby of collecting Indian lore.

But even so, the pair had to delve deep for the strip pros­pectus and the creation of char­acters. Mr. Fletcher, who was once assistant to Carl Ed on "Harold Teen," made sketches in various museums and pored over old drawings. He now has acquired a number of Colonial etchings and drawings. Mr. Wendt says he has read a small library of diaries, manuscripts, and rare books relating to Indi­ans and early settlers. In ad­dition he's done a lot of travel­ling—over country scouted by the strip hero. Another tool they use is some rare maps of Colonial America. As a result, they claim au­thenticity of clothing, weapons, household utensils, homes and even villages and cities in the strip.

"We hope the cartoon story will be welcomed in the schools because of its authenticity," says Mr. Fletcher. "However we consider our first job is to create an interesting story. Jed Cooper's exploits happen against a background of real history. We don't make a point of the history, but it's there, and the kids seem to get a kick out of it."

In the interests of the strip, Mr. Fletcher is busy studying Delaware Indian villages, and Mr. Wendt is trying to learn Leni-lenap, the language of the Delawares.

The strip started in the Trib­une Nov. 13, goes into third-page size April 30.

Apart from your excellent blog, I enjoy a few others. One by my e-mail pal Michael T. Gilbert. He has been posting on the Fiction House artist Al Walker and included information on his (weekly?) newspaper strip Nip and Tuc. Maybe you can add something about that or add it to your own list. Read more at: http://www.michaeltgilbert.com/journal/page6.

Hi Ger -
Thanks for the link. Pretty neat feature, well drawn and decent gags. I'd certainly never heard of it before. Yet more microfilm I have to order one of these days...