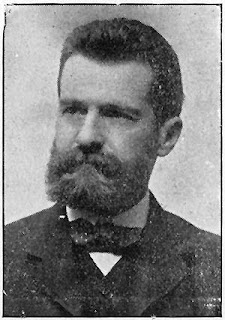 It would be a hazardous undertaking for anyone to attempt to designate the best cartoonist in this country. One might easily have a personal choice, but here is a case where authorities differ and probably no two people with a right to make such a selection, if anyone has, would agree. One would select some artist for his ideas, regardless of draw­ing and technique; another would judge on the basis of good drawing; while a third would choose from the standpoint of composition; and a fourth would have a personal viewpoint differing from the others, making the correct choice, if there be such, purely a matter of in­dividual opinion.

It is a good deal like the selection of the best looking girl. Here, each judge, if he be a man, has his own standard of perfection, differing from other men's standards enough to make the selection among a number of real beautiful wom­en largely a matter of chance rather than of any scientific accuracy obtainable in the grading of chickens of the feathered variety, where a certain number of points count for the comb, the hackle, wings, legs, etc. 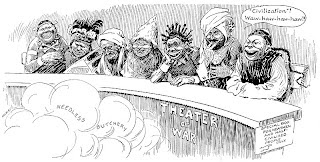 And this calls to mind what Deacon Jones said about his wife. He was thankful that all men did not see things the same way, for if they did everyone would want his wife; to which Deacon Smith added, under his breath, "If they all saw things as I do no one would want her."

While it might be hazardous to draw comparisons between live cartoonists, it is comparatively safe to mention dead ones without fear of hurting anyone's feelings.

One cartoonist that the writer always admired was the late L. D. Bradley of the Chicago Daily News.

Bradley was one of these workmen who are not afraid to give both time and thought to their productions. Some cartoonists pride themselves upon the rapidity with which they can turn out their stunt. I know of one who showed up in his studio about ten o'oclock, dictated his letters to his private secre­tary, completed his daily cartoon stunt and had his hat on, ready to leave, about eleven. And, by the way, he is still holding down the job, which goes to show that some men do reach a point where they can do about as they darn please and get away with it. But we would not advise anyone to try the same stunt, for in most cases it wouldn't work.

I have been told by those who worked along side Bradley in the News office that he often spent the entire day at his cartoon and was seldom satisfied with his own work. Everything was worked out in pencil with the greatest care be­fore ink was applied; and then frequent changes were made in the finished pen drawing before it was finally turned over to the engravers.

The Chicago Daily News published a series of war cartoons by Bradley, dur­ing the year 1914, that were a fine con­tribution to the cause of peace on earth, good will towards men. These were published before the U. S. was entangled in the world conflagation, during a per­iod when nearly every cartoonist in the country was getting out anti-war car­toons. 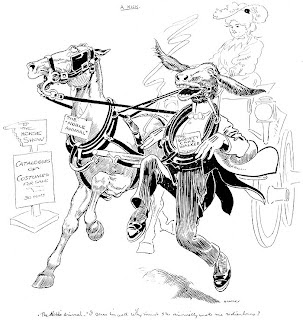 That cartoonists have some power in shaping public sentiment cannot be doubted, but the anti-war cartoons cer­tainly did not cut much ice in this coun­try; and cartoons that were published before the war and applauded would have resulted in the suppression of the paper that contained them, if printed same can be said with truth again. Just why this country was plunged into war after the U. S. went in, and probably imprisonment for the artist, if not bodily injury.

It is undoubtedly true that before the war a vast majority or the American people were opposed to war in every way; and it will not be long before there is another story, nor does the writer pro­pose to take space here to give his ver­sion of the matter, though he has opinions quite contrary to those usually propounded.


We are publishing in this issue without further comment a couple of Bradley's anti-war cartoons, also a fine sample of his daily grind. [actually only the two accompanying here were in the issue - Allan]

Young cartooners might well study his work for strength of line, accuracy of drawing and good composition; though it might be mentioned in conclusion that some of his work was more or less stiff, due, we take it, to his painstaking draftsmanship.

Comments:
Great cartoonist-- but an even better chin-fur cultivator! best beard in comics since Mr Am.

I was hoping that somone could help me with a piece of art that I have. Is this from L.D. Bradley.
It is of 4 pigs in the moon lite and the capsion is "full moons"
and is signed Bradley 1984 109/400
You can email me at mark_n_angela@bellsouth.net

Thanks Allan.
Do you know who it might be?
Thank you,
Mark