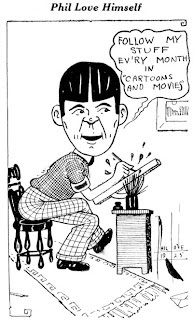 [reprinted from Cartoons & Movies, 1925 - while Phil Love never made a splash as a cartoonist (not hard to see why), he did, among other things, become a very well-regarded features editor for the Washington Star, a regular and very entertaining columnist in Cartoonist Profiles, and even started a prototypical version of the NCS way back in the 1920s]

Phil Love, comic artist and "colyumnist," has just been appointed art director for the Cartoon Advertising Service, 3003 Alameda Blvd,. Baltimore. He is the author of "Nothing in Particular," which appears in Cartoons and Movies magazine each month.

Phil's popularity is attested by the fact that when we inadvertently left out his name from his department in June, several readers wrote asking if he were sick or away on a vacation!

Philip H. Love is also a contributor to Collegiate Wit and Fraternity Fun, Ziffs, Whiz Bang, Follies, Paris, Flapper's Experience, 10-Story Book and other publications, for which he draws or writes-or both.

Phil is modest, but some day we hope he will tell our readers in detail exactly how he "broke into print" as a writer and comic artist, with suggestions to beginners.

Following his career in brief: "My first cartoon work was done at Calvert Hall College, Baltimore, back in '22 when I illustrated the year book; previous to that I had served as editor of the school paper for three years. I got the idea that I was a cartoonist and quit school before the end of the term - thus abandoning my ambition to become a lawyer. 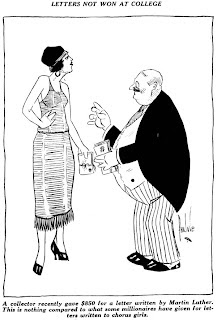 "I got a job as staff artist with The Baltimore Times, now extinct. Later I went with a local commercial artist as an apprentice but soon decided that commercial art held no charms for me. I quit and went to Chicago as art editor and associate editor of The Flapper (later Experience, now Flapper's Experience) to which I had been contributing for some time.

"Later I moved to Philadelphia where I maintained a studio and did free lance work, then went to New York with High Life. After that I returned to Baltimore and have been there ever since (about a year and a half). In Baltimore I have been engaged in the publishing business - Youth - and after selling out my interest continued to freelance, which I am still doing.

"My only art education was a correspondence course with the Landon School in 1919. Since then I have learned by experience and am still learning.

"I am now art director of the Cartoon Advertising Service, a concern making a specialty of direct appeal advertising cartoons and comics for advertising purposes. We have most of the larger local stores in Baltimore as clients and also furnish local druggists with a service - one special frame and two cartoons a month to boost sales."

Comments:
Phil Love was my grandfather, and I have a number of old cartoons of his up in the attic, in addition to his columns, etc. Thanks for the profile,