Obscurity of the Day: Sammy Stahl 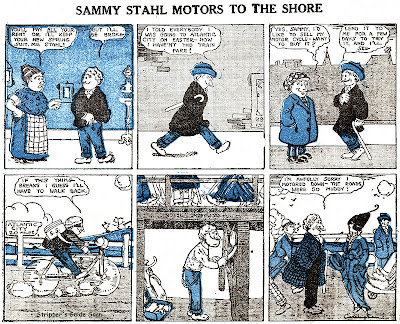 Sammy was a gadabout cut from the same cloth as H.A. MacGill's Hall-Room Boys. His life, like theirs, was a fiction of wealth and privilege built upon constant lying and Machiavellian scheming. The subject's handling in Sammy Stahl wasn't so much funny as chilling in light of the fact that Cunningham often didn't give Sammy any comeuppance for his sins, as in the sample above. In short, a pretty poor excuse for a comic strip.