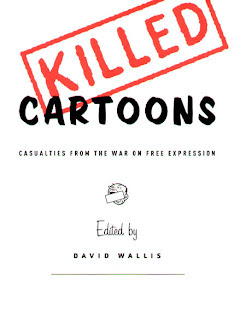 Killed Cartoons provides an impressively even-handed look at cartoons that have been spiked by newspaper, syndicate and magazine editors. Yes, many of these examples do show editors to be spineless jellyfish, but on the other hand there's no shortage of cartoonists who, by practically any measure, go beyond the realm of good taste.

The book is organized into five chapters covering cartoons loosely based on their touchy subjects -- religion, politics, race, business, and sex. Each chapter presents a series of cartoons and commentaries. The essay accompanying each cartoon tells the story behind it and how it came to be relegated to the circular file. Many of the cartoons were submitted by the artists themselves, and in those cases the accompanying essays feature particularly enlightening commentary from the trenches. Editor David Wallis thankfully doesn't give the cartoonists free rein to wallow in self-pity, though, but takes the opportunity to elevate the discussion to show the big picture of how the publishing business works, what pressures are faced by editors and how cartoonists fit in the publishing business. 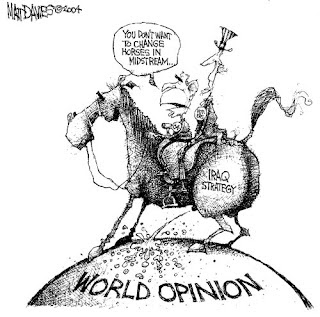 It's not hard to see why editors would reject some of these cartoons, but other 'kills' are indefensible. The book is replete with cartoons that were rejected because an editor just didn't want to rock the boat. For instance, during the Catholic priest child molestation scandal of 2002 Kirk Anderson penned the cartoon below, an incredibly powerful piece. His cartoon comments on the Catholic church trying to sweep the allegations of priest child sex abuse under 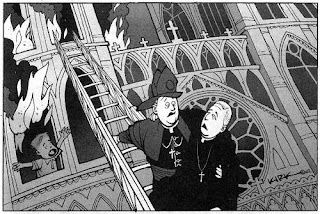 the rug, a story that bedeviled the church in 2002.

The cartoon is a masterpiece of art and hard-hitting commentary, yet Anderson's editor at the St. Paul Pioneer-Press decided not to run it. According to Anderson the paper's editor was at the time trying to curry favor with local Catholics by running some pro-Catholic church material to get back into their good graces. This cartoon was deemed a step back in the wrong direction and thus was relegated to file 13.

In essay after essay we meet editors who are unwilling to print cartoons that might stir up a bit of controversy. In some cases the editor's reasoning is defensible. J.D. Crowe, for instance, worked for a conservative paper but regularly drew cartoons espousing liberal views. Inevitably some of his cartoons are going to get spiked. But when an editor agrees wholeheartedly with a cartoon's message and yet won't run it because it hits too hard or threatens to annoy some segment of the newspaper's readership, that's an abdication of the responsibilities of journalism. In an age where many regard newspapers as an antiquated news source on a par with the town crier, is this any time for editors to be publishing a cowardly, limp-wristed paper notable only in its strong stance against relevance?

One piece of wise counsel comes from cartoonist Bob Englehart. He believes that many editors kill cartoons not so much for lack of spine but simply because they're lazy. His suggestion to editorial cartoonists is this: "When editors kill a cartoon it's because they don't feel they can defend it. Sometimes if I can give the editor the words to say to the [reader] that calls him on the phone or the politician ... then he'll let me go ahead and draw the cartoon." A sad commentary on newspaper editors to be sure, but perhaps a useful suggestion for cartoonists.

Comments:
Great blog you have here. I really enjoy your efforts. The obscure strips are a treat to read.

My bird and I run a similar blog about comic strips with less an emphasis on history and more on the current state of comic strips. We do have some historical strips and commentary as well. Check it out! http://blog.zingerding.com. I just thought I'd leave a comment to introduce myself since we're compatriots of the comic strip cause.

P.S. Thanks for the book tip on this post. I'll definitely go check it out!