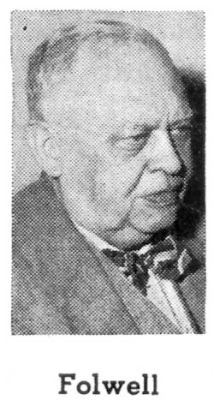 "Dear sir: My wife always gets mad when I look at my watch when I am talking to her. What about your wife?"

This succinct statement of a married male's problem came by post to Ar­thur H. Folwell of the New York Herald Tribune Syndicate. The married male wasn't looking for advice. He was merely stating his case.

"An admirable letter," says Mr. Folwell, who is no Dorothy Dix. As writer of the "Mr. and Mrs." daily and Sunday gag strip, he has simply chron­icled the wry plaints of the married—without solution—for 21 years.

"I think if anything is to be said for "Mr. and Mrs.", it is the fact that we don't try to create a situation—we try to catch those already waiting to be used," he says.

Psychologists might say get­ting the irritations of married life down on paper reduces their size. But whether that's so or not, Mr. Folwell's strip seems to establish the same sort of accord that exists between two long suffering men, waiting side by side for two wives shopping too long for too many things. He obviously lays bare many a universal situation. The most frequent comment from readers: "My wife says you must be hidden in our house somewhere."

Being chronicler of the im­perfect and realistic seems to keep the 72-year-old sanguine. Wearing a rotund middle and a one-sided smile, he remarks: " 'Mr. and Mrs.'? They're happy as the average yeoman married. I don't think their state is unhappiness. It's the give and take of everyday life."

"You can't," he added, "very well put them in the divorce courts."

Of course there was a time when editors complained. That was years back, after the late, talented Clare Briggs, "a sprightly little man with a yellow overcoat and a cane over his arm," had started it as a Sunday page in 1919. The artist—perhaps to make draw­ing easier—would frequently close the page with a blacked-out panel, carrying the caption, "And so on, far into the night," indicating the verbal war didn't end at taps, Mr. Folwell says.

But followers of Mr. Briggs have toned down the scrapping a bit while keeping the over­all flavor of the comic. And Mr. Briggs' reputation as a comic artist of high skill re­mains.

"He could have drawn with a skewer dipped in ink and it would have been alright," says Mr. Folwell.

Artists Without Ideas
Mr. Folwell's connection with the comic strip came about be­cause the late Charles A. Voight, "a cracking, good ar­tist" who drew "Betty" for the syndicate, was nevertheless sometimes late with his work.

Brooklyn-born Mr. Folwell, who was on the pre-Hearst Puck from 1902-16, had had the spe­cial province of thinking up ideas for artists there. "I never in those days knew an artist that had an idea of his own," he says.

Becoming editor of the old Tribune magazine in 1921 and drama editor of the Herald Tribune in 1927, he continued his dealings with artists. In addition, he had published his own humorous writings in vari­ous magazines—so he seemed a natural to work with Mr Voight.

Later, in 1927, when Clare Briggs took an 11-week trip to Europe, Mr. Folwell was the obvious replacement on "Mr. and Mrs." And for the six months before Mr. Briggs died in 1929, the team of Mr. Folwell as writer, and Edward McBride as artist, filled in on the Sun­day page. Successive artists on the Sunday page were Frank Fogarty, Ellison Hoover, and currently, Kin Platt.

In 1931 Mr. Folwell insti­gated the daily strip, which was drawn at first by Ellison Hoover, and is now drawn by Kin Platt. Mr. Platt wrote the Robert Benchley short film, "How to Read"; was radio comedy writer for Jack Benny and others; created "Supermouse"; drew Pepsi and Pete, the Pepsi Cola cops for two years; is now drawing two juvenile books.

The method for preparation of the strip is "from Tinkers to Evers to Chance," says Mr. Folwell. i.e., from Folwell, to Comics Editor Harold Straubing of the syndicate, to Platt—and back again.

Working in Garden Spot
Fans call attention to the Folwellisms in the strip—the bits of homespun philosophy.

To questions on leanings toward wisdom, Mr. Folwell re­plies playfully, "I do remember as a kid being very much im­pressed by somebody's saying Ralph Waldo Emerson was a thinker. It struck me as a good idea, being a thinker, at the time.

"I don't know that I could compete with Emerson in that line but," he grinned, "I am also pretty certain he couldn't do anything along this line." Mr. Folwell retired as drama editor last year and now uses a desk in the Herald Tribune Garden News department for his comic strip work.