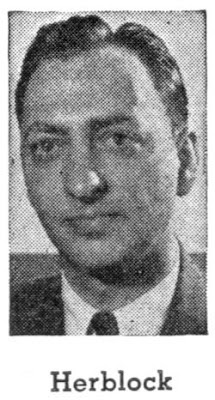 If Herbert L. Block of the Washington (D. C.) Post is the pattern, the tools of a prize-winning editor­ial cartoonist are:

• An office with at least 1,000 newspa­pers in untidy stacks, kept be­cause "I may want to clip them sometime."
• Two radios whose news flashes sometime speed him to the teletypes on another floor.
• A Sears, Roebuck catalogue for aid in drawing household articles.
• Pictures of Washington politicos, for caricaturing same.
• Some turkey feathers, gift of Fred Seibel, Richmond (Va.) Times-Dispatch cartoonist, for brushing art gum eraser leav­ings off drawings.
• Goutless legs to facilitate trips to the Capitol.
• And, convictions.

"Editorial cartooning should express sincere convictions," says Herblock, whose six-a-week cartoons are syndicated by Post-Hall, New York. "The work is like that of a colum­nist or editorial writer—to find out as much as you can—and then put it down on paper."

Fewer Thoughts on Weather
In discussing his work, which is notable for its expressive drawing, Herblock minimizes drawing. "First, be right; then, be effective; then, be a good artist," he told us, in the clear­ing that is two chairs in the center of his small, cluttered office.

In a field where an idea is the pearl of great price, he doesn't worry about ideas.

"You find you are doing fewer cartoons about the weather these days," he observed. "Things are going pretty fast —there's a lot happening, of consequence. You sit here and see these things coming up in Congress. It isn't a matter of finding a subject, it's a matter of deciding which is better to do.

"I don't think an editorial cartoon necessarily has to be funny—or with words or with­out words," he continued. "The only rules are general rules— it should be simple. You should say something."

Interest in Events
And so if you bring up one of his recent cartoons dealing with Senator McCarran and the Displaced Persons Bill, the car­toonist immediately forgets the cartoon for the subject matter. "Gee, I'm glad it finally went through," he said—of the bill, not the cartoon. Adding that in his opinion, Senator McCar­ran was "a one-man bottle­neck." Mention of a cartoon on Senator Kerr and the natural gas bill brought the quick, earnest question: "Do you think Truman'll sign it?"

Herblock works hard, in un-prima donna fashion, having no favorites among his own work. A cartoon titled "British Plane," showing an anxious German soldier watching the sky while grinning Frenchmen looked on, brought him a Pulitzer Prize in 1942. Herblock says it was "allright, but I had drawn a lot on aid to the Allies."

A Sigma Delta Chi award in 1949 pleased him mainly be­cause of the citation which termed his work "the product of a genuine and integrated philosophy. His cartoons are always simple, never labored."

The cartoonist's appraisal of his own philosophy: "Liberal? That word's been kicked around a lot. I'm for democracy. I've never been against the little guy." He recently won a Heywood Broun Award.

Topic by Lunchtime
No slave to system, Herblock's day usually begins at 10 a.m., includes reading about four papers a day (the Washington Post is the only regular). He settles on a subject by lunch-time. Depending on the gen­eral heat and light of Congres­sional doings, he may go up to the Capitol to make sketches, follow happenings. He's been at the Capitol every day of the McCarthy hearings.

Next step is to make different sketches on the selected sub­ject. A McCarthyism cartoon which went to newspapers in the form of a GOP elephant reluctant to get atop a wobbly stack of smear buckets might have said the same thing a dif­ferent way. Other ideas for the same cartoon, sketched but later rejected, were: the GOP elephant with Gabrielson atop the elephant's head but reluc­tant to get out on the end of the trunk with McCarthy; and a blindfolded elephant carrying McCarthy, Bridges, Wherry and Taft, all grinning, while a dour Vandenberg looked on.

Selection by Elliston
Herblock has drawn as many as 20 sketches in trying to hit on the day's cartoon. Washing­ton Post Editor Herbert Elliston makes the final selection. The cartoon is then brushed in and Herblock always wishes he had more time.

The 40-year-old native of Chi­cago was a cartoonist for the Chicago Daily News at 19, doing a two-column insider, generally in light vein, while Vaughn Shoemaker did the front-pager. In 1933, he went to NEA serv­ice, stayed 10 years until he en­tered the Army. The first of 1946, the ex-sergeant joined the Washington Post, and soon Post-Hall was distributing his cartoons, which showed among other things, the Herblock Atom. His Atom, a sort of bomb-shaped robot, has caused a lot of comment.

A 1950 laurel to Herblock was that the National Gallery of Art's Rosenwald Collection bought several of his cartoons. (Britain's David Low is the only other cartoonist represent­ed in it.) Another plaudit has been the recent interest in ex­hibiting his work. A showing of 200 of his cartoons at the Corcoran Art Gallery in Wash­ington in January and February attracted President and Mrs. Truman one Sunday morning. Says Herblock of the visit, "He was nice and pleasant."