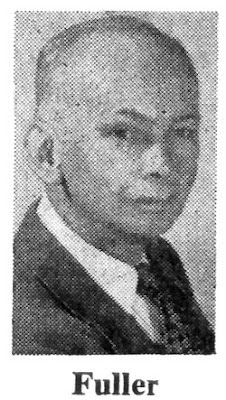 Ralph Fuller,who draws and writes AP News-Features' "Oaky Doaks," was glad his pleasant lizzarddy looking dragons had met with such good reader reception. But he couldn't promise another passel immedi­ately.

Action of his comic adventure strip, full of "Thud and Blunder," according to the promotion, pre­sumably transpires in a medieval kingdom. But Mr. Fuller thinks nothing of throwing in a tele­phone for convenience of char­acters at King Corny's court.

His comic vehicle is so aptly contrived that the cartoonist's im­agination can range considerably beyond just dragons.

"I liked a sequence when Oaky was captured by the Vikings," Mr. Fuller confides. "They got over to the American Coast and got mixed up with the Indians. That gave me Vikings, and Indians as well as knighthood to burlesque.

Anything a Kid Would Want
"I just finished a Sunday se­quence where there was a combi­nation of pirates and Indians and buried gold, shipwrecks, cast-ashore-on-a-desert-island, and any­thing a kid would want in a fea­ture. I was sorry when I had to quit it."

The 60-year-old cartoonist was wearing a red tie and a blue tweed suit in his light green studio, which is curtained in gold and overlooks the back lawn of his Tenafly, N. J. home. "I think every man has a little of the knight in him," he observed, in explaining why he took to the idea of "Oaky Doaks" and launched the daily strip June 17, 1935.

Bom in Michigan, Mr. Fuller was 16 when he sold his first car­toon to the old Life for $8. The next mail, he received a Life letter saying, sorry, they had al­ready used that joke and would he please send back the $8. He did. But he soon sold them an­other cartoon.

He attended the Chicago Acad­emy of Fine Arts, and while working as a staff artist for the Chicago Daily News, he got $100 for the first colored picture ever reproduced by Life. That sold him on the magazine market. He decided to come to New York.

He free-lanced widely for a number of years, but when Life and Judge began to fold, he saw the magazine market was dimin­ishing. He started looking around for a comic strip.

Should Always Be Funny
AP Features, at that time, was interested in a detective strip and asked him to try one. But Mr. Fuller has always believed comics should be comic.

And one day back in 1935 he had a big decision to make. He had a syndicate offer to take over one of the top humor strips be­cause it looked like the creator was going to walk out on his con­tract. On the other hand, AP had several pages of continuity for a new strip that had been drawn up by young William McCleery (who was later to become head of the feature department and then a playwright).

Mr. Fuller remembers he took the pages of continuity over to the lobby of the Roosevelt Hotel to read them—and when he'd finished, he'd decided in favor of the new strip. He liked the idea of Knighthood in King Arthur's court, he saw the comic possi­bilities and he also preferred a strip that could carry his name.

So Oaky Doaks, a young blundering country boy who made good at court, came into being. The strip was daily at first with Mr. MeCleery writing the con­tinuity, but after awhile Mr. Ful­ler took that over. In 1941, the comic went Sunday, too.

In producing the strip, Mr. Fuller uses uncluttered non-busy backgrounds for his comedy of situation. "I think a situation is funnier than a gag—but if you get both, it's really fine." While claiming he has nothing to "get off his chest" but humor, Mr. Fuller is perhaps jousting in more than jest: "Maybe I'm try­ing to burlesque the serious ad­venture strips, I don't know," he says.