Obscurity of the Day: Unlucky Looie 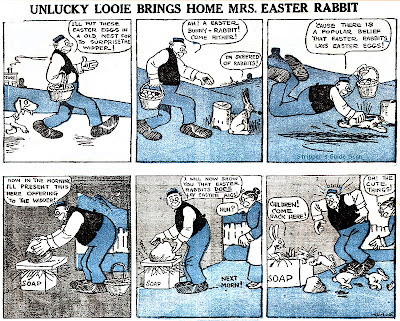 Here's a strip by one of my personal favorite early cartooners, Roy W. Taylor. Roy was certainly no Winsor McCay, but he had a breezy big-foot style that complemented his slapstick gags. Taylor worked at so many different papers in so many cities in his checkered career that if I could interview just one cartoonist from the era, it would have to be him. I hesitate to admit it, but I once actually had a dream where this happened. Yeah, I know, that is really pathetic.

Taylor had a drinking problem, and it eventually killed him around 1916 (this info from a surviving relative). But when he was working, hoo-boy did he turn out a lot of material. Almost all of it easily qualifies for obscurity status today, with the possible exception of Yens Yensen Yanitor, which wasn't particular notable for anything other than that wild title -- it tends to stick in your head once you've heard it.

Taylor got a lot of mileage out of his Looie character. The first 'Looie' series was called Lucky Looie and it was done for the Chicago Daily News in 1903-04. Next came Unlucky Looie, and it ran in the New York Evening World for a very brief period in 1906. The final and longest running version was created for the Philadelphia North American. It appeared there from October 8 1911 to December 6 1914. The sample above is from this last version. Sadly, this incarnation of Unlucky Looie represents Taylor's last comic strip work, and it does show that his cartooning abilities were fading badly.

The North American's Unlucky Looie strips were reprinted in the World Color Printing Sunday sections of the late 'teens.