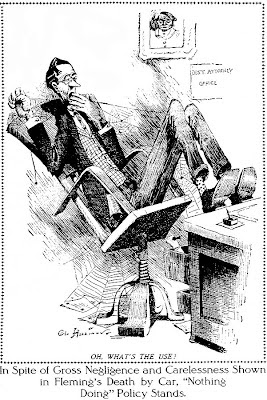 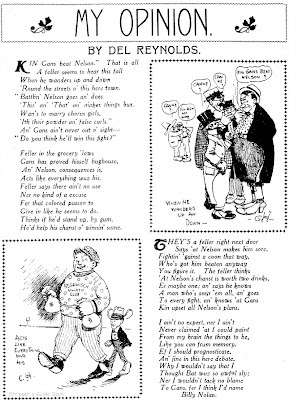 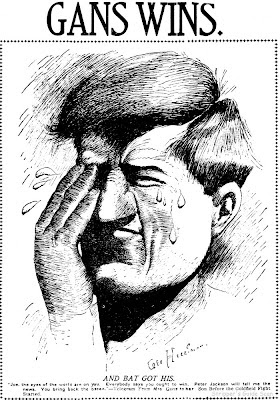 Herriman Saturdays continue with these three cartoons, originally printed on September 2, 3 and 4th, 1906. The first apparently revisits that train wreck incident alluded to in previous cartoons, and the others concern the Gans-Nelson boxing match. As a bonus, we get for no additional charge some of the worst poetry ever committed to type.

The highly touted fight, held in the Nevada hinterlands to escape anti-boxing laws, had the box-office appeal of pitting a fan-favorite boxer, Battling Nelson, against one of the greatest fighters of all time, Joe Gans. Gans was black, and any interracial boxing match was big news in those days. Nelson was considered to be over-matched, but Gans was coming into the twilight of his career, and may have already been ill with tuberculosis (he would die of the disease just a few years later). The grueling fight lasted 42 rounds, and was finally won by Gans on a foul, a low blow by Nelson. The foul call was amazing because black fighters were rarely given the benefit of a clean fight in those days. Referees made it a habit to turn a blind eye to dirty tricks by white fighters against black fighters.

Battling Nelson has a cartooning connection, by the way. He was involved in a very public and stormy love affair and marriage with newspaper cartoonist Fay King later on.

Comments:
Beautiful
Your place has become my first port of call on a saturday.
I have a xerox of tad's cartoon for the Nelson-Gans fight... There is a resonance between that and the herriman for same, the big close up I mean.
must fetch it out of my files and post it.

James A. Fleming was run down by Santa Ana Trolley - one of “The Big Red Cars” that can be seen on “Who Framed Roger Rabbitt” - on 1906 AUG 30. On AUG 31 Coroner Trout was accused of “Unfairness” for immediately declaring at the inquest (held at the Morgue) that the death was due to a simple accident without responsabilities of the Pacific Railways.
So Fleming is surely the man in the coffin of the SEP 1 cartoon Allan put on the blog last week: a freshly happened casualty and not an old one as I thought.
Best, and thanks for the scans
Alfredo

Another nice set of images. Thanks again. The little fellow with the big hat who is walking with Nelson is Tex Rickard, the fight promoter. Gans-Nelson was his first big success. He went on to promote most of Jack Dempsey's fights during his championship years.

Thanks Alfredo and Joe - I'm sure I speak for all that we really appreciate any and all sense that can be made of these cartoons!