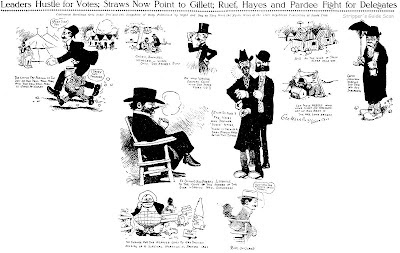 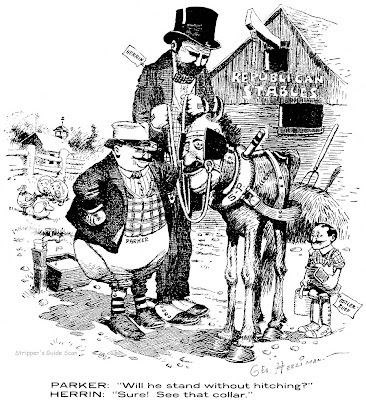 It's back to politics on this Herriman Saturday. The above cartoons were printed in the LA Examiner on September 6th and 7th 1906. The subject of the cartoons is California's Republican convention, where a fellow by the name of Gillett, apparently seen as yet another tool of the Southern Pacific Railroad, was nominated for the Governor race. I'll hope for the indulgence of our historically knowledgeable readers for further explanations.

Comments:
Nothing particularly notheworthy to add to what Allan wrote. Anyway --

CARTOON 1- The Santa Cruz Republican Convention was the biggest State convention ever held in California. The town hotels were full, hence the gags with people sleeping in crowded tents.
Judge J W McKinley, Attorney for the Southern Pacific Railroad from LA, was the chairman for the convention. No idea of whom “The Little Fat Person” is (maybe lawyer Edward Russel Young, associated with McKinley).
Congressman James N “Jim” Gillett (1860-1937) , a representetive of “The Machine” (see “Herriman Saturday” for JUN 2) from Eureka, Humboldt County, was candidate for Governor and won the ballot at the first round (591 vs 233 votes) against imcumbent Governor George Pardee (the man on the chair at the center of the image) and J. O. Hayes (see below). Gillet was inaugurated Governor on 1907 JAN 8; Warren Porter was elected as Lt. Governator
Jay Orles “Black” Hayes from San Jose was the publisher of the “San Jose Mercury and Herald”; his brother Everis Anson “Red” Hayes was US Representative for California. I don’t know the reason of the “Black” and “Red” nicknames, but I suppose (and may be totally wrong) that they were due to their countenance: big black beard and blushy cheeks (see cartoon).
A strong group of San Francisco delegates came to the convention, most pro-Machine but against Gillett. Between them, Billy Bell”, the “Gutter Bos” of SF, Mayor Eugene Smidt. The latter was the puppet of Abraham Ruef, “America’s most erudite city boss” (http://en.wikipedia.org/wiki/Abe_Ruef) (“How well the puppets dance today”), a cunning politician involved in many scandals. Eventually, when at the Convention things begun to go bad for the San Francisco group, Ruef, backed by W. F. Herrin (see below), jumped in the band wagon and took Gillet’s side in exchange for the Waterfront Patronage in SF.
No idea about the top-hatted “German Count” (can’t read the tag), and I can’t understand the meaning of the Parker gag.

CARTOON 2 - William F Herrin was the head of the political bureau of the Southern Pacific, and we have already made the acquaintance with Walter Parker and Ruef.
see also
http://userwww.sfsu.edu/~epf/1995/primary.html
Best from Alfredo

Yup, Alfredo, you hardly had anything to add ;-)

The top image I had some trouble with, hadn't gotten the copy exposure quite right, so the quality isn't up to snuff. However, the tag on the German count contains only a squiggle - no text at all. Kinda strange.

Thanks again for the historical interpretation ... no fair giving away the election results, tho!

Allan: Thanks for more Herriman. I can only add a small correction to Alfredo's thorough statement: the last name of Ruef's puppet mayor of San Francisco was spelled Schmitz. Eugene Schmitz was president of the Musician's Union. Ruef picked him as the candidate of the Union Labor Party because he was a good-looking, popular figure. I hope I'm not jumping the gun by mentioning that Ruef wound up in San Quentin, convicted of bribery. Schmitz was acquitted at his second trial for bribery.

And people say that politics are bad nowadays.

(from Alfredo again) - A possible clue to the "German Count"’s identity. In 1904 William Mulhendorf , a smartly dressed man from LA, posed as “Count Von Hoffman of Baden Baden, Germany", and succeeded in staying at the best hotel in Pasadena, lavishly spending, drinking champagne, etc, and trying to pay with bogus checks. He was arrested, got a suspended sentence, then escaped. There is a slight possibility that his feat was still remembered after two years, and a swindler in a convention crowded with swindlers searching for hotels “may” fit.
In my former posting I forgot about Grove Johnson (1841-1926) from Sacramento, the man at the right of the cartoon. He was a pro-Machine Republican, member of the State Assembly. At the Convention, he strongly promoted a Japanese Exclusion Act. I don’t know if the “Keeping the dew of his shrubbery” caption is an American slang of which I ignore the meaning, or has something to do with the fact that non-naturalized Japanese “issei” (first-generation immigrates) were beginning to control large areas of farmland, or both.
Search “Grove L Johnson” and “Japanese Exclusion” on Google for more info.
Best - Alfredo

"Keeping the dew off the shrubbery" = "Keeping his whiskers dry"; no deep meaning intended there, I think.