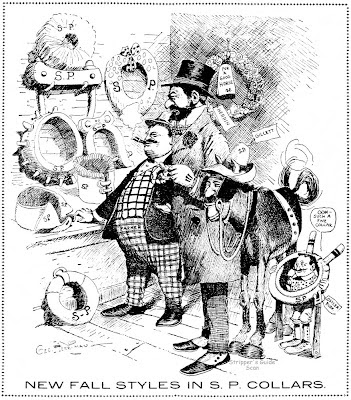 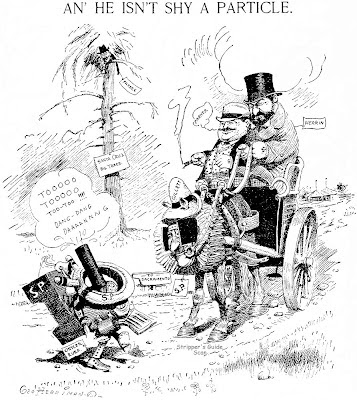 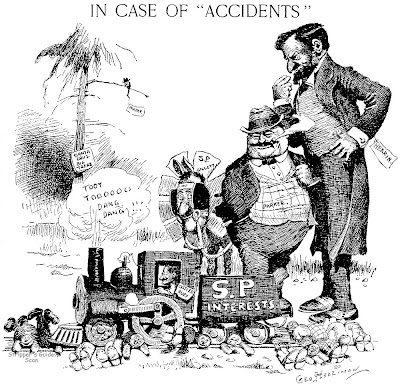 These cartoons were published on September 8, 11 and 12 1906 in the LA Examiner. Herriman here is pretty much beating the same drum every day, likening candidate Gillett to a mule at the beck and call of the Southern Pacific Railroad.

Since I haven't much commentary on these 'toons, I'll take this Saturday morn to mention Herriman's art style. Previous to 1906 Garge's artwork was far, far rougher than the polished stuff you see here (here's an example). Based on the style, and his known friendship with Tad Dorgan, I think I can safely say that Tad took Herriman under his wing and gave him some pretty intensive art lessons. In fact, if we look at Tad's work of this time next to Herriman's they're hard to tell apart. To compare, check out the June 20 post on Eddie Campbell's blog.

Comments:
Ha! Bet that you hoped not to hear from me, as this week’s cartoons don’t need particolar comments, being – as Allan said – just variation on the theme of “the Machine” and Southern Pacific Railways. But here I am notwithstanding: as I told in my last comment, I find every excuse to do the day after tomorrow what I should have done yesterday.
As you probably know, the Herriman “Examiner” cartoons are just the follow-up of a very irregularly-scheduled series he did for Harrison Gray Otis’ “Los Angeles Times” (see “Herriman in LA” in Eclipse’s “Komplete Krazy Kat Komiks” vol. 5 and 6). His first cartoon was published there on 1906 JAN 8; the last one on 1906 AUG 13 (Allan -- I sent you some scan, so, if you want, you can put them in the blog). Less than a week later, on 1906 AUG 18, the series begun again in Hearst’s “LA Examiner”. Herriman had already worked for Hearst two years before, as a sport cartoonist for the “NY American” (1904 APR 24 – 1905 JUN 2), while simultaneusly drawing for Frank A. Munsey’s short-lived avatar of the “NY Daily News”.
The “LA Times” was then strongly Republican (now it is Democratic-liberal); so, when Herriman passed to the Democratic “Examiner”, he had to change some of the targets of his political cartoons (in the first LAT cartoon one of the victims was Hearst himself). I wonder – and this is the question I pose to this blog - if he did this just for money or for ideological reasons.
Best
Alfredo