Okay folks, you voted for it and here we go. Today we embark on the complete* reprinting of George Herriman's cartoons for the Los Angeles Examiner.

The first cartoon, published 8/22/06, covers the Republican convention in Santa Cruz, where the Southern Pacific Railroad held their apparently customary role as string-pullers. You'll find a pretty good history of these events in California politics in this essay. The second cartoon, published on September 1st, again shows Boss Parker, but I haven't a clue who Trout is or the significance of "number 147" in the coffin.

Herriman had not yet hit his stride in LA, with a gap of eight days between cartoons. It wouldn't be long before he was appearing in practically every day's paper. Stay 'tooned.

I just can't seem to come up with a catchy title for this series. "Herriman Takes LA", "Herriman's Golden State Nuggets", "Saturday Afternoons with George" - all came to mind and rejected. Any suggestions?

* Well, not quite complete. There were a few cartoons that resisted my photocopying efforts and just wouldn't turn out in good enough condition. I also didn't copy Herriman's occasional spot cartoons; they weren't particularly interesting and small cartoons are usually muddy on microfilm. 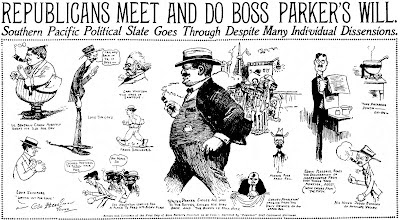 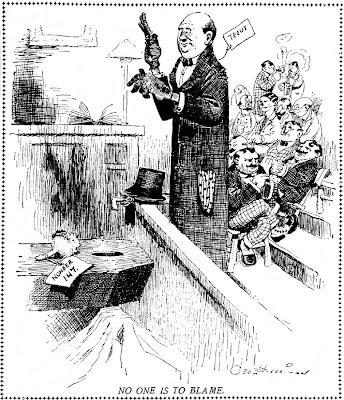 Comments:
Thanks for doing them all. A good start.charlie

Here is a short note oncerning the cartoon of Sept 1 (Trout). Dr J. H. Trout was Coroner (hence the garb) in LA; behind him Parker and Dunn (see my note on the first Herriman post).
I dont know what “No 147” means; it may be a car number, a train number or whatever else; but I have good reason to think that it has to do with some railway accident like the Oneonta Collision and the following scandals. Coroner Trout was a specialist in holding inquests and postponing trials whenever there was a railway accident, and tried to define as “accidental” many casualties as he could. (“No one is to blame”)
Concerning the title of the feature, i propose “Let George do it”

I would like to send you an email. Would you please send me your email address?

Hi Alfredo -
Thanks so much for continuing to post analysis of the cartoons, even if I do feel pretty sheepish that it takes an Italian to teach us American history!

And to Stephen, my email address is listed in the "About Me" section on the left side of the blog.

Allan: Thanks for giving us more Herriman. Looking back at one of last week's cartoons in light of Alfredo Castelli's comments, the fish in the bowl on Dunn's lap is Coroner Trout. He says "The railroad is not to blame -- Purely an accident." The hat is a classic undertaker's model.