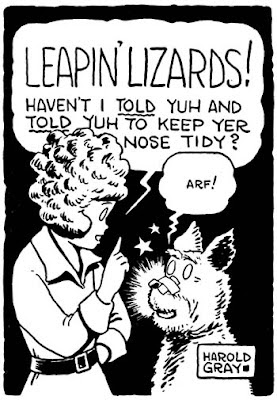 Orphan Annie, the little girl of Harold Gray's comic strip, has one fixed idea. It is simply this;
"Keep your nose tidy!"

Annie arrived at this philosophy by sticking her nose into other people's business for nearly 27 years. Even at the start, in the Pall of 1924, in Chicago, in the "age of innocence," she was wise beyond her years.

Harold Gray became 30 years older than his creation last Jan. 20 [sic]. Looking back from this 57th birthday over the years, he opined that his own philosophy coincid­ed closely with Annie's. If there has been any moral behind the multifarious adventures experi­enced by the ageless orphan, it might best be summed up in that same inelegant expression, "Keep your nose tidy!"

Life As It Is
Mr. Gray, the Kankakee farm boy, now a plutocrat, but to his way of thinking "damned little changed by the years," hopes there has been no moral at all. In writ­ing and drawing the strip, he has aimed to picture life as it is. He has studied humanity.

After the farm, he was graduated from Purdue, worked on the pa­per for a while in Lafayette, Ind., began his long association with the Chicago Tribune in 1917.

In the Gray strip, Annie is the constant foil. Life flows by her like a river while she stands still. Floating on the tide are both the good and the bad. Annie sizes them up, but does not try to change them.

"God deliver me from a re­former, even an honest one," Mr. Gray ejaculated the other day. "I dislike preaching, and missionaries of any kind. I don't mean religious missionaries exclusively. They are bad enough. Worse, in my opinion, are communistic evangelists, or evangelists of democracy, or the capitalistic system."

Against Butting In
"Why can't we leave each other alone? Butting into the other fel­low's business is a prime cause of trouble, misery and war.

"There are eternal verities easy enough for all to learn: tell the truth, work hard, save your money to be independent; in short, 'keep your nose tidy!' And that's enough."

The millions who follow "Annie" in the more than 275 daily and Sunday papers pay off the author artist handsomely; pos­sibly for constantly mirroring the composite mind of the multitude. 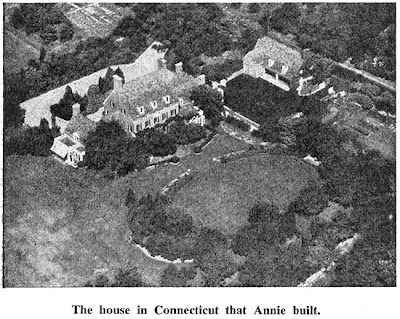 It's up for sale. The Grays have bought another place across the bay from the present four-acre estate. The new 10-room house would just about fit in the living room at Southport, but it is set on 22 acres of land. A farm-born boy, Harold likes land. But doesn't like farming, and doesn't farm.

The Roving Kind
The Grays like to keep on the move. If it isn't from one house to another, it is in their Lincoln touring the United States or Can­ada. One summer they went abroad. But they prefer this side of the Atlantic, and "the long brown road, leading wherever you choose."

Mr. Gray's roots are deep in America. One ancestor migrated here from England in 1640. On his mother's side, an Ebenezer Gay was a Colonel in Washing­ton's army. His father's family came from England in the 1830's.

Mr. and Mrs. Gray have no children. Their Siamese cat, "Loa" (the letters of little Orphan Annie) is called "Kitty." Mr. Gray's mother is living with them now. She is seriously ill, and that keeps them all at home.

The Chicago Tribune-New York News Syndicate makes Mr. Gray keep a three months' supply of strips ahead. On a trip, if he gets behind, he'll "hole up" at a hotel for two or three days and catch up. His cousin, Bob Leffingwell does the lettering and puts in some of the backgrounds. Bob also has his own two strips, "Little Joe" and "The General." [actually, "Ze Gen'ral", and it was the topper to "Little Joe"] Bob's and Harold's mothers were twin sisters. Bob is unmarried and lives in Fairfield, Conn.

His Only Collaborator
When Harold is in Southport, Bob comes to work every day at the Gray's. They have two desks there in a book-lined study. Both can and do work while a radio blares. Television proved too dis­concerting, and was banished up­stairs. Bob is Harold's only collab­orator, if you can call him that. Harold thinks no one can illustrate another person's ideas as well as the originator.

"I'm no artist," he insists. "I've never gone to any art school. But I know what I want and do the best I can. Bob does the dirty work."

It's while traveling that Mr.Gray gets ideas for Annie's adventures. The author calls himself "gregarious, not a party-going man, but a guy who likes people and likes to talk with them." He stores up memories of the people he meets and the stories they tell. He doesn't take notes. Nor does he use the material he gathers very soon. Rather he lets it ferment in his mind.

"Once," he recalled, "I had Annie mixed up with some fellows selling newspapers, high pressure stuff. I felt entirely satisfied and complimented when Max Annenberg, the circulation manager, called up and said, 'that's exactly the way it operates, that's real. How did you know about it?' " 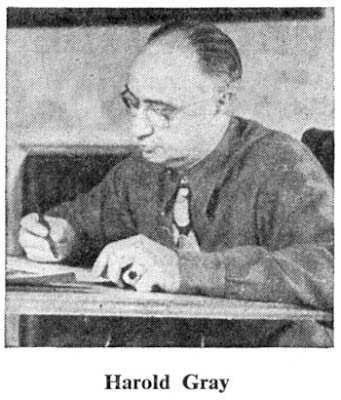 Always Objective
On their trips, the Grays go incognito. He rarely visits a newspaper office, doesn't make speeches. The only time he does stop off at a newspaper is when he wants to get some low-down from the reporters, for whom he maintains a vast respect.

"Like reporters, I try to be objective, to write and draw things as they are," Mr. Gray told me.

"Oh, I glorify a little once in a while, perhaps. Sometimes my gangsters have hearts of gold. But I have crooked politicians and honest ones, snobs, wastrels, gamblers, kind-hearted and cruel people, foolish and wise all living and fighting together, usually in a small town."

Right now the small town is Puddle, up in the hills. The leading character. Mayor Bons, is not particularly pleasant. He's never earned a nickel for himself, but thinks he's hot stuff - a composite of different people Mr. Gray has met. It turned out that he appeared to be very real to one man in Boston, who threatened suit.

The syndicate's lawyer called. "Where did you get that name, Bons?", he wanted to know.

"I'm writing the angry Mr. Bons a really good letter," the lawyer said, "and that's all I wanted to know."

A common trick with Mr. Gray is to spell a name backwards. He doesn't like to use ordinary names, because he's bothered enough by people who all the time are recognizing themselves in a strip, and write in about it. Some 20 have threatened suit. Only one, however, ever took the case into a court. On Mr. Gray's advice, the syndicate refused to settle, and after several years of asking vainly for $10,000 for a damaged reputation, the plaintiff dropped the whole thing a short time ago.

The continuity that led to this suit concerned an OPA ration board head and the similarity of names of a Gray character, symbolical of a snoop, and of an OPA man in Connecticut.

Other people enjoy identifying themselves with Gray's true-to-life characters. Such a one was a Miss Clare Treat, head of a home for incorrigible children in Iowa. Mr. Gray had never met anyone by that name when he gave it to a terrible head of a girls' home. The Iowa Treat was delighted.

Who Is Annie?
In the case of Annie herself, no one knows who her lost parents were, or at least no one is telling. Capt. Joseph M. Patterson, late editor of the New York Daily News, and Harold Gray were the obstetricians at her birth. Mr. Gray was on the Chicago Tribune at the time. He had been working with Sid Smith, helping him draw "The Gumps." The Captain wanted a new strip for the News.

"Make it for grownup people, not for kids," the Captain advised. "Kids don't buy papers. Their parents do."

Mr. Gray was enjoying his job on the Tribune. Most of all, he liked to roam Chicago streets with other newspaper men, stopping at their hangouts for a late snack.

One early morning on the streets, he caught sight of a little gamin, quite evidently in the so-called age of innocence, wise as an old owl.

"I talked to this little kid, and liked her right away," he recalled.

"She had common sense, knew how to take care of herself. She had to. Her name was Annie. "At the time some 40 strips were using boys, as the main characters; only three were using girls. I chose Annie for mine, and made her an orphan, so she'd have no family, no tangling alliances, but freedom to go where she pleased. "Patterson and I worked over the first strips together. We kept clear of violent action, such as kids like, kept our story as close to life as we could."

Thus was Annie born, never to grow up, although some of today's readers are grandchildren of the first who followed the strip.

Comments:
Where and when was this published, Allan?

Oh! You mean before that. It was in E&P sometime in 1950 (clipping's been refiled already).