'Jasper' Burlesques Tarzan Theme
Eric Ericson burlesques the Tarzan theme in "Jasper", George Matthew Adams Service comic. The scrawny, bespectacled hero was brought up by apes, was taught English by a parrot, gets his morning shower in the form of a spray from an elephant's trunk. He is frustrated in a desire to swing from tree to tree. And wild animals generally feel sorry for him.

Mr. Ericson has sold a number of animal gags to magazines, a market he has reached for 16 years. Some of the takers he lists: New Yorker, Saturday Evening Post, Collier's, Esquire.
In addition, he has supplied gags for nine well-known comic strips and panels. (He remains a ghost gagman, won't say which strips.)

He thought up nonsensical inven­tions for the late Col. Stoopnagle such as an upsidedown lighthouse for submarines and a fly swatter for sportsmen (the latter had a hole in it to give flies a sporting chance.) He has also been gag-man for Olsen and Johnson, is currently planning a TV show which will parody travelogues.

He promises some zany trappings for the strip including lightning bugs that drink fermented fruit juice to get a glow; an owl that utters such profundities as "Two heads are better than one - when you work in a sideshow."
[Ed - does anyone have a sample of this strip? I've never found any.]

Cartoon Strip Family Tells Charter Story
Philadelphia—Use of a car­toon for editorial expression was inaugurated by the Bulletin when a new city charter was prepared for submission to the voters.

Two and a half months inter­vene between the announcement of the charter and a special elec­tion. The Bulletin desired to an­alyze salient features of the new charter and acquaint the people with them at the same time it was urging support of the charter in the election.

It was felt that a daily edi­torial would soon become mon­otonous, especially if continued for two and a half months; also that the issue would be better dramatized in pictures that would show how the charter affected an average family.

To that end, the strip, "The Philbys and the Charter," was de­vised. It presents a continued story, with editorial comment in the balloons, and runs at the low­er left of the editorial page across the equivalent of five columns.

The first strip appeared on the day the charter text was an­nounced and will continue week­days until the special election is held.

The Philbys are a young couple with two children, the father in­terested in civic affairs and the wife and children curious about how the charter will affect them.

The idea for the strip originated with George T. Eager, assistant to the publisher. The artist doing the strip is Harry Fritz.
[Ed - again, anyone have samples? I've added this to my monster list of things to check on microfilm]

Sports Cartoonist Now an Evangelist
From a sports cartoonist to a minister is the experience of the Rev. Charles B. "Chuck" Templeton. For nearly five years he did a daily sports cartoon for the Toronto Globe and Mail. It was also syndicated to 24 Canadian newspapers.

In 1936, Mr. Templeton gave up his work as a sports cartoonist to take up evangelism. At present he is studying at Princeton Theo­logical Seminary and is pastor at the Ewing Presbyterian Church, Trenton, N. J. During Lent he has been preaching at the Fifth Ave­nue Presbyterian Church in New York City. 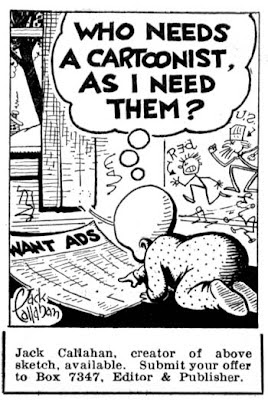 Jack Callahan was a great cartoonist whose work ran in the Hearst papers for almost thirty years; his excellent series included Freddie the Sheik, Clarabelle's Cousin, Cinderella Suze, Home Sweet Home, and many others. How sad that he was reduced to placing an ad in E&P shilling for work.