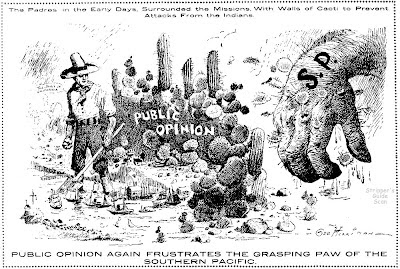 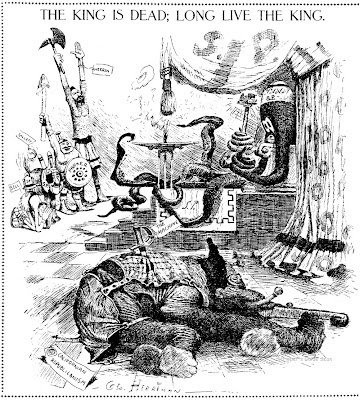 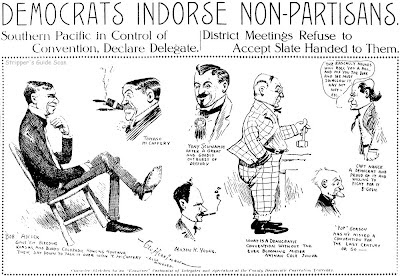 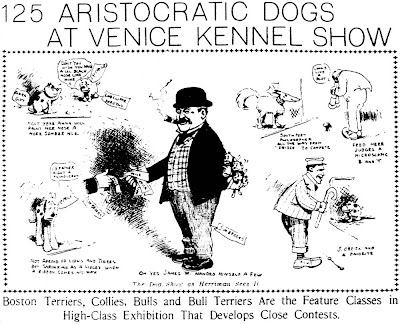 On September 19th and 20th (the top two cartoons) we find Herriman back in form, producing some of his best editorial cartoons yet. The wall of cactus is an excellent cartoon not so much for the drawing but the idea. In 1906 as now, editorial cartoonists tend to fall into the habit of reusing the same old symbols over and over. For instance today we see Bush drawn as Alfred E. Neuman, Cheney as the devil far too often - certainly apt characterizations, but worn out from overuse. Here Herriman comes up with a wonderful symbol that calls on early California history to illustrate a current situation, really hitting home because the reader hasn't seen the symbolism used a million times over.

The second cartoon, on the other hand, uses very familiar symbols, the type Nast popularized thirty years before, but what a piece of art! Wonderfully detailed (note the octopus' scepter, for instance) and many different styles of crosshatching give the work tremendous depth and variety of texture. Wow! A real bravura performance.

The last two cartoons appeared on September 21st. A perfunctory set of caricatures from a county Democrat convention and another dog show cartoon. Herriman got stuck with the task of covering dog shows quite a bit -- you'll see more of these. The dog show cartoon may have redeeming qualities but the newspaper printed it so small that on microfilm it mostly turns to mud. I'll transcribe what I can make out of the text, starting clockwise from upper left.

Upper left:
Tag on dog 1: Anna gift
Tag 1 on dog 2: End (Eng?) clipper Dorothy
Tag 2 on Dog 2: illegible
Dog 2 says: "Don't you wish you had a little black nose like mine?"
Caption: Next year Anna will paint her nose a more somber hue

Upper middle:
Caption: South poet philosopher all the way from "Frisco" to compete

Upper right:
Man: "Looks like a blot"
Caption: Fred here judges a microscopic B and T (?)

Lower left:
Tag on dog: 1st prize
Dog says: "I'd rather fight a rhinoceros"
Caption: Not afraid of lions and tigers but shrinking as a violet when a ribbon comes his way