Today I'm going to be all over the map. Let's start with ...

The Herriman Daily Contest
I have received a paltry two entries in the "Name the Herriman Dailies" contest announced last Friday on this blog post, and ending today. One entrant named Home Sweet Home, while Alfredo Castelli, in his public post, also correctly recollected the blog post on The Amours of Marie Ann McGee, so his total is two.

I know of a minimum of 9 Herriman daily-style series that predate Proones, so there's ample opportunity to improve on that score. I know that at least two more of those series have been documented 'publicly', in other words, not through my as yet unpublished primary research.

Stan Goldberg's Mendy
I'm looking for information on the strip Mendy, which, according to Alter Ego magazine, ran as a weekly newspaper comic strip circa 1997-2002 in various Jewish newspapers. I knew there was a comic book series but was not aware of a newspaper release. Any info, especially names of papers and running dates, would be most gratefully appreciated.

Park Row
I just recently learned about a feature film titled Park Row that was released in 1952. The story was apparently about New York newspapers in the 1880s-90s, a subject of considerable fascination to me. I checked around and could find no evidence of it being on video. Can any of our movie mavens tell me where I might obtain a copy?

Barnacle Press
If you haven't visited Barnacle Press lately it's definitely time to take a look. The good folks in charge have done a major redesign on the site are now adding lots more of those great early comic strips.

New York Post Dailies
Comics historian Cole Johnson awhile back sent me some samples of dailies that were running in the New York Post in 2000: 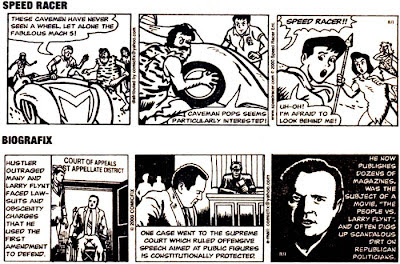 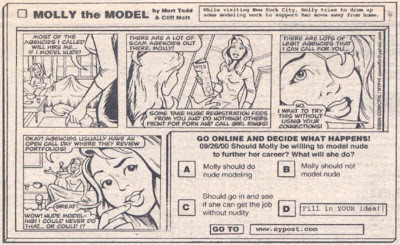 They are all copyrighted by Comicfix. I found their website without any trouble but can't make head or tail over whether they are still in the syndication business or just doing web-based material now. I've asked Jeffrey Lindenblatt, expert on all things New York, to see if he can find running dates for this material in the Post, but I'm hoping some readers know more about the background on these obscurities. How long were they syndicated? Was it only to the Post? What other papers ran it? What exactly is Comicfix and how did/do they do business? Who were the uncredited artists and writers on these features? Were there any other newspaper features from Comicfix?

I have it as a Michael Delle-Femine (aka Mort Todd) project.

No sources for the above.

Hi DD- Oops, thanks for the heads-up on the typo; also for the additional info.