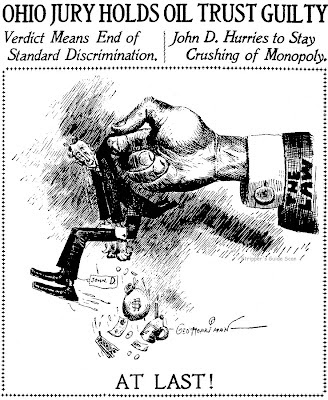 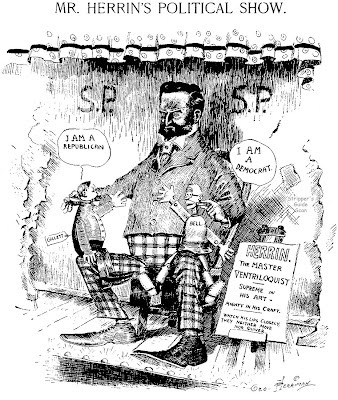 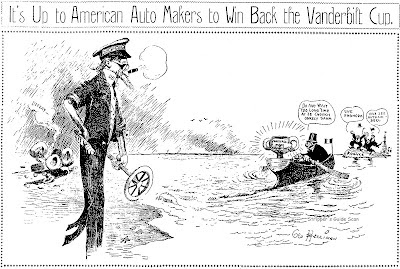 Taking a break from Waddles for the weekend; he'll be back on Monday. Today's budget of Herriman starts out with some xenophobia, a fairly typical California editorial cartoon for the day reacting to the influx of Asian labor. Next up, one of Herriman's few editorial cartoon contributions on national news items reacts to another verdict against Rockefeller's Standard Oil monopoly. Third we have the Examiner casting its net wide to accuse both Democrats and Republicans of being at the beck and call of the Southern Pacific.

Finally we have a cartoon commemorating America's third straight loss in the Long Island Vanderbilt Cup automobile race. The race was conceived to encourage American auto makers to get into auto racing, a new sport taking Europe by storm. After three straight losses, though, all to French cars, not to mention a spectator being killed at the 1906 race, the concept was shelved for a year. The cup race resumed in 1908 with an American succeeded in winning the race for the first time.

The top cartoon appeared on October 19, the second two on the 20th, and the bottom cartoon on the 21st. A Herriman editorial cartoon published on October 18 had to be omitted because the photocopy was beyond redemption.

Comments:
Allan: Very interesting to see the Vanderbilt Cup cartoon. The 1908 winner was Harry Grant, who drove an ALCO (American Locomotive Company) car at an average speed of over 63 mph. Just the other day, I posted something about on my blog:
http://cablecarguy.blogspot.com/2007/10/lewis-strang-at-wheel-of-fiat-car.html

Hello, Allan---The top cartoon of the overwhelmed American worker could be run legitimately today----if you put sombreros on the engulfing hoard.----Cole Johnson.