It's always fun to see old photos of people reading newspaper comics. Here's a neat batch of photos, all courtesy of Cole Johnson, that depict various Hollywood types caught in the act of enjoying the funnies. Commentaries below each photo by Cole Johnson. I've thrown in my two cents in [square brackets] telling you stuff you probably already knew. 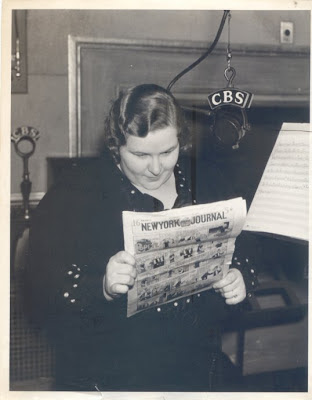 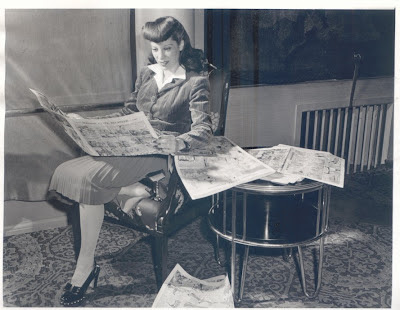 Dinah Shore with a circa 1943 comic section of the ILLINOIS STATE REGISTER. [Dinah Shore was originally a torch singer, later starred on a long-running daytime talk show. She also, despite a wide age difference considered scandalous at the time, had a long very public romance with Burt Reynolds.] 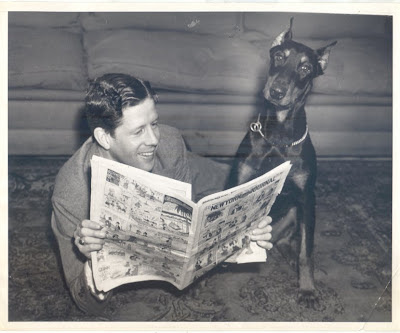 Rudy Vallee and friend with the February 9, 1935 NEW YORK JOURNAL comics. [Rudy Vallee was a singer and bandleader, one of the most popular in his heydays of the 20s and 30s. He later turned to acting and appeared as a villain on the old Batman TV show. In the late 70s he was for a brief while an opening act for The Village People.] 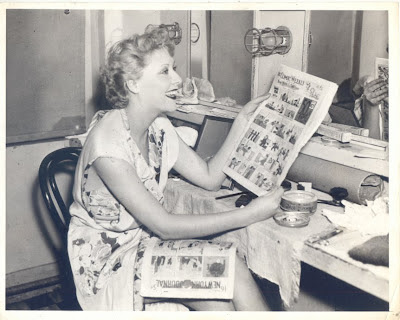 Vivian Vance in her dressing room at Cole Porter's Broadway show "ANYTHING GOES", with the March 2, 1935 NEW YORK JOURNAL and March 3, 1935 NEW YORK AMERICAN comic sections. [I only knew Vivian Vance as Lucy's sidekick on I Love Lucy -- who knew that she was such a hot tamale 20 years earlier!] 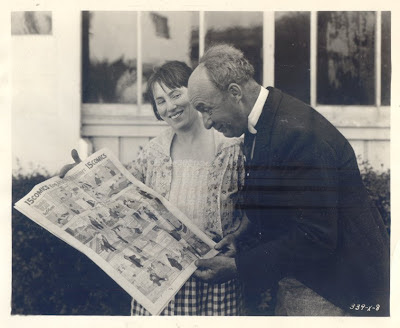 Polly Moran and J.Farrell Macdonald, stars of BRINGING UP FATHER (MGM 28), look over the August 1, 1927 LOS ANGELES EXAMINER comic section. The careless casting ("Jiggs" is taller than "Maggie") tells a lot about the production. Like so many films based on comic strips, the first thing they do is tamper with it's conventions, and produce something nothing like the actual strip. In this case, the film is centered on Jiggs' usually boring background character daughter, Nora, and her attempts to restore the family fortune. 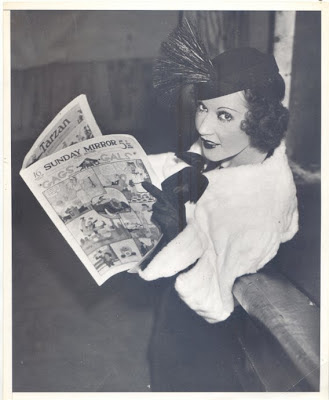 Ethel Merman and the January 20, 1935 N.Y.MIRROR comic section. [Like Kate Smith, Ethel Merman was another songstress who really knew how to belt them out. Her most famous songs are "Everything's Coming Up Roses" and "There's No Business Like Show Business"; but perhaps her finest hour was in the classic comedy "It's a Mad, Mad, Mad, Mad World" in which she plays Milton Berle's harpy mother-in-law.] 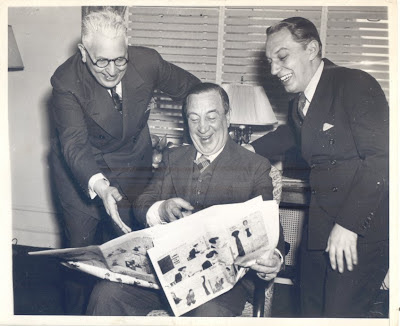 Russ Westover, comic actor Hugh Herbert, and Otto Soglow pretend to have a belly laugh with the April 10, 1938 LOS ANGELES EXAMINER section. An odd bit of publicity for THE GOLD DIGGERS GO TO PARIS (WB 39), in which Herbert appeared. 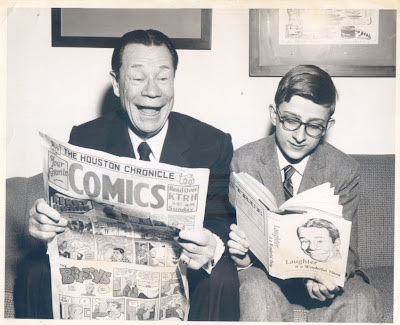 Comedian Joe E. Brown with 15-year-old John Trever, Jr., of Charleston, W.V., who won first prize in the Newspaper Comics Council's contest, "What newspaper comics mean to me." Both are seen in New York, even though for some reason Joe has the HOUSTON CHRONICLE comics (for March 3, 1957). Joe is promoting his book, "LAUGHTER IS A WONDERFUL THING". I'd like to see what the kid wrote to win the prize.

Many thanks to Cole Johnson for sharing these delightful photos!

Comments:
Hello, Allan---Glad you're up and rolling again. Oops-- the comics Joe E. Brown has are obviously from the HOUSTON CHRONICLE, not POST. ---And Burt Reynolds was in love with Dinah Shore, but they never actually married. ---Cole Johnson,

The contest was to draw a cartoon picture and write the essay in 100 words or less.
Young Master Trever drew a picture of Pogo riding Albert and wrote:
"Newspaper comics are a strong influence on American children and a long-standing American tradition. Many of us wish we could do the things the characters do and be in their places. I get numerous laughs from the silly antics of some characters, and the continuing adventure comics stimulate thought and excitement."

As reported in The Delta Democrat-Times of Greenville, Mississippi on March 7, 1957.

Quite the silver-tongued devil Trever was. Thanks for rooting that out DD.

My guess is that several different photos were taken, each one showing Brown holding up the comics section of a different member of the Newspaper Comics Council.

John Trever, Jr. is today the political cartoonist at the Albuquerque Journal.-----Cole Johnson.