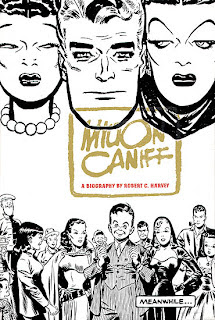 
As cartoonist biographies go I daresay that there has never been, and will likely never be, another of the length and depth of R.C. Harvey's Meanwhile. Coming in just shy of a four digit page count it could scarcely be otherwise. Even more so when you consider that the impressive heft of the tome is not substantially padded with photos and art. To be sure the book is indeed well illustrated, but only with visual aids directly related to the narrative -- there are no long reprints of Caniff's strips here or lengthy portfolios of miscellaneous art.

It is the nature of any successful cartoonist that they spend the bulk of their life hunched over a drawing board, endlessly skrith-skratching away. This is not the sort of lifestyle that would seem to lend itself to a lengthy biography. When we consider that there are plenty of well-rounded biographies of political figures, film stars, activists, people whose lives are filled day by day with the fodder of the biographer, that manage to tell their stories in a shorter page count, we have to wonder just what in the world Harvey is on about in a page count that rivals the King James Bible.

I for one certainly approached the book with trepidation. I've been a fan of Harvey's work for years, but my enjoyment of his work is tempered with the caveat that he is on occasion guilty of going over the top. When he goes into critical analysis mode he is always perceptive and thoughtful, but he can also beat a horse within an inch of its life. I was concerned that here Harvey would be shooting the works, analyzing Terry, Steve and their creator ad nauseam.

That fear, I'm happy to say, was completely groundless. Despite the enormous page count this book is, wonder of wonders, a tightly written narrative. In the tradition of classic biography, what critical analysis there is is grounded in the opinions that Caniff himself discussed with Harvey and others in interviews. Given that Harvey says the book in its original form was some 700 pages longer (!) than the final revision, I'm guessing that any extended author's analysis fell victim to the editor's red pen. If so, the book is better for it.

So what exactly does lurk between the distantly separated covers of this volume? Well, Harvey was lucky enough to be tapped by Caniff himself as his offical biographer in the early 80s. This afforded the author with ample opportunity to question his subject at great length. While Caniff was, as Harvey relates, not a particularly forthcoming interview subject, by dint of persistence the author eventually ended up with a treasure trove of Caniffiana. The book is, as we might expect given the size, an impressively complete chronicle of Caniff's life and the times in which he lived. However, completeness doesn't necessarilty translate to interest-sustaining or entertaining, and that's where Harvey's book truly amazes. I've read plenty of long form biographies where it got to the point that I was rooting for the subject to kick the bucket to cut the narrative short. That's not the case here. While I couldn't say that every single page is riveting, edge-of-the-seat reading, Harvey does an expert job of keeping the reader involved and interested all the way through. Any reader who is at least moderately interested in comic strips, even those not particularly fans of Caniff, will undoubtedly find the book fascinating.

Speaking of being a fan of Caniff, I should admit that I am not numbered in that legion. Of course I recognize Caniff's importance in the history of comic strips and the artistry of the two strips for which he is most famous. However, I think Caniff's writing is far too precious, heavily laden with hokey slang and tortured vernacular that I find grating and distracting. His subject matter, primarily military adventure, is just not my cup of tea. His cartooning, after a relatively short but glorious period in the early 40s when he was first influenced by Sickles' innovation of chiaroscuro comic strip illustration, later takes things too far for my taste, turning the strip into a series of ink-blots (not entirely Caniff's fault, of course - the comic strip was shrinking more rapidly than he could adjust his art style to suit, finally ending up so small that no one, not even Caniff, could possibly do a realistically rendered adventure strip).

The point is that you don't need to be a Caniff fanatic to thoroughly enjoy the book. I recommend it not only to the ardent Terry or Canyon fan, but anyone with more than a passing interest in the art and business of the comic strip in America. Caniff's story is, after all, the history of the adventure comic strip in particular, and the newspaper comic strip in general. Harvey does a superb job of weaving all the various aspects of the story of American comic strips into the narrative. We see Caniff marketing his comic strips (and find out just how tireless a promoter he was), we see him coping with the miniaturization of his daily and Sunday spaces, we gain a deep understanding of the relationship between the creator and syndicate. We learn one cartoonist's reaction to the unforgiving daily deadline pressure, and how assistants and ghosts can become indispensible in the process of producing a strip that doesn't have the luxury of relying on simplistic art and daily gags. We learn the intricacies of producing an integrated daily and Sunday storyline, a balancing act that is one of greatest tests of skill that any writer could ever face. We see one cartoonist's bold reaction to the demonization of his art form when accused of being, bizarrely, a cause of juvenile delinquency. We see how a cartoonist deals with the use, and misuse, of his creations in other media like movies and television.

I have only a few minor criticisms of the book, most worth mentioning if only so that this review doesn't seem utterly slavish in its support. First, the book is divided into just nine epic length chapters. It would have been more reader-friendly had it been broken up into more manageable chunks that could be read at one sitting. And although there are illustrations throughout the book, usually well-placed to coincide with the related narrative, each chapter ends with a gallery of additional illustrations. These sections would have been better broken up and dispersed throughout the text, if only to relieve the long stretches of type-dense pages.

The narrative flow drags a bit for a hundred pages or so near the end of the book. By this time Caniff was constantly being lured away from his drawing board by an endless procession of accolades and honors from every organization under the sun. Harvey unwisely devotes a considerable amount of space to the details. This section, while it does have occasional interesting points, could have been shortened. If the purpose was to show that Caniff was revered by his peers and his fans, well, that wasn't much of a secret anyway.

Finally I have to question Harvey's use of invented conversations. In the first half of the book the author occasionally uses a device where he stages a conversation, usually set in Caniff's favorite watering-hole, in which we eavesdrop on a group of cartoonists shooting the bull. Harvey uses the device to impart some information in a presumably more entertaining method than dry prose. The device falls flat, though, because the conversations are stilted and too obviously staged for our benefit. And although Harvey makes no secret that the conversations are his own inventions, in a scrupulously researched work otherwise factual throughout I found these passages somehow discomforting from the standpoint of journalistic ethics. Call me a stick in the mud.

These are all picayune little quibbles, though. Harvey's work is, quite simply, a masterpiece of biography. He has set the platinum standard by which all future cartoonist biographies will be judged. Most, likely all, will be found wanting in comparison. It is one thing to produce a thick book, and not necessarily a good thing at that. It is an entirely different thing that Harvey has achieved here. He has produced a work of lasting merit, eminently readable, brimming with meticulous research, a work that must be atop the required reading list of every cartooning fan and cartoonist.

Thanks for the review. I couldn't get through the early years myself, but maybe I'll pick it up later.

On a different note - I see in Hogan's Alley that an article is announced on Lee and deCarlo's My Friend Irma. Can you tell me who is writing that?

Dunno, but you can ask the editor, Tom Heintjes: hoganmag@gmail.com

"As cartoonist biographies go I daresay that there has never been, and will likely never be, another of the length and depth of R.C. Harvey's Meanwhile."

I can think of one exception: Harrison Kinney's 1200-page biography of James Thurber.

I was glad to read in your post that the book is tightly written; like you, I also am at times critical of Harvey's occasional tendency to overexplain a given idea. Even though the invented conversations you mention don't sound very appealing, I look forward to reading this book soon.

Hi Rodrigo -
Is it fair to call a bio of Thurber a cartoonist biography, though? That was a very minor part of what the man was famous for, sort of like saying the same for, say, a bio of Enrico Caruso.

And don't sweat those invented conversations, they take up maybe four or five pages in the whole book.