Can You ID These Artists?

I'm trying to get my index listing for the True Comics Sunday series as buttoned up as possible. Problem is that many of the toonists who contributed pages (and there were quite a few) didn't sign their work. I do know, or at least strongly suspect, that all these artists were primarily in the comic book field -- all the ones who signed were, anyway. I know Sam Glankoff did lots of the Sundays, with additional contributions by Ed Smalle, Lew Glanz and Chad Grothkopf and others.

I know some of you folks are also comic book fans and researchers, so I'm hoping you can ID some of these guys. Here are four samples from 1942. The first is a guy who did quite a few pages in 1941-42. The style is quite unique -- the faces, I think, are a dead giveaway to the artist, but who is it? 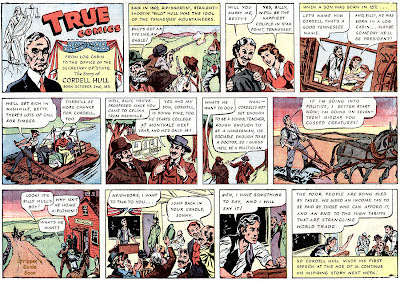 Our second contestant only did a few True Comics pages. The style is pretty basic but it has a few stylistic flourishes that may make an ID possible. Certainly this cartoonist was not on the "A" list, but can anyone ID him? The style looks to me like one I remember showing up in a lot of Blue Bolt and Target Comics: 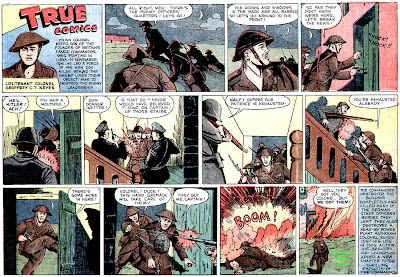 Now here's a mystery artist with some real panache! Looks sort of like Mac Raboy to me, but I don't know his work from this era nearly well enough to make a positive ID: 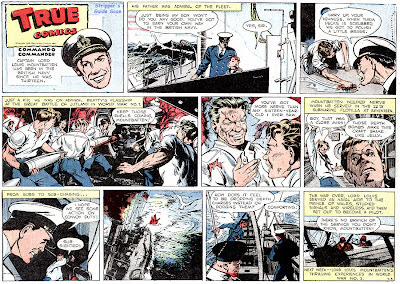 And here's the last of our group. This cartoonist's work is pretty generic looking to me, but maybe there's something distinctive enough for an ID: 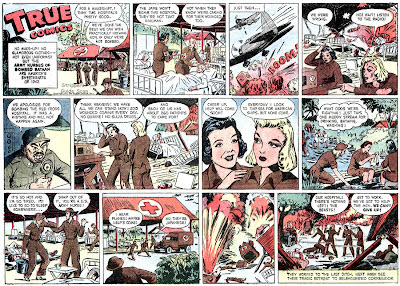 Okay, that's four mystery artists. If anyone has definite ideas on the IDs please let me know. If you'd give me some idea of your certainty (50%? 75%? 99%?) that would be helpful.

Comments:
All I know is Joe Simon is supposed to have done them in 1944, so I hope you will continue these into that area. I am no help on these, though.

I used to know Ed Smalle's art real well - but it's been a couple years since I was certain of his style - so I wont guess yet. (but its possibly the first guy, less likely the second) His father was quite a singer though.
Lew Glanz is a penname for Louis Glanzman, you can email him getting his address from his website -
http://www.louisglanzman.com/

And I was saving up Joe Simon as a surprise -- we'll get to him in a subsequent post.

Other than those already mentioned I have Jack Sparling and John Spranger listed as contributing artists. Jerry Bails' Who's Who has Harry Lucey doing two weeks in 1942.
I don't know if the above did Sundays or Dailies or both, or if that is their art on any of your samples.
Wasn't Elliot Caplin the editor of this series?

The first one is by Lloyd Ostendorf a regular on Treasure Chest comics from Dayton, Ohio in the sixties and seventies.

The second is probably Lou Fine who was doing a lot of advertising comic work at the time.

I don't know much about this series but it must have been produced by Johnstone and Cushing who handled the comic section in Boys Life and probably Treasure Chest as well.
I'm 100% sure of the identification of Ostendorf and Fine.

Hi John -
Re Lloyd Ostendorf, can you suggest somewhere I might see some of his comic book work? All I could find so far is a site with some later work, and it didn't have any of the style cues I'm seeing here.

Hi Allan,
See my blogpost today on Yesterday's Papers. There is a link there to Treasure Chest digital archive with lots o' Lloyd.

Hi John -
I checked the Treasure Chest site (wow - what an achievement by the way!) and the only Ostendorf stories they referenced were from 1962-63. In these I could see no trace of the style of mystery artist #1. Of course an artist's style could well have evolved a long way in 20 years. Anything earlier you can suggest?

OK, here's a good one from 1952,"Outdoors With Dan" about boy's author Dan Beard, on the Treasure Chest site. Vol. 7, No. 9, January 3, 1952 page 10-13. His line is tighter and his skill in drawing expressive faces and hands is much in evidence. A quick link is to look under B for Beard under the main heading People.

Funny someone would suggest Lou Fine for the third, for I would have guessed one of the artists mimicking Fine aorund the same time... which would be either Alex Kotzky or Jack Spranger (or I believe it's Jack, anyway).

You could be right- if so its a dead swipe of Lou Fine.

Hi John -
Checked out that 1952 story, I still see no resemblance in the distinctive faces which are my main point of reference on the 1942 mystery artist. Again, artists do get better in ten years, so I'm certainly not ruling it out.