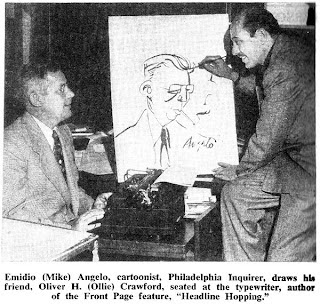 Philadelphia—Two local news­papermen, both of them serious-minded guys at heart, have rede­ployed their journalistic talents to the business of making readers laugh because they feel people to­day are getting entirely too gloomy.

The laugh producers are Oliver H. (Ollie) Crawford, a reporter turned humorist; and Emidio (Mike) Angelo, a portrait painter who switched to cartooning be­cause he figured it was much more fun as well as profitable. Both work on the Inquirer.

Ollie is author of the front-page feature, "Headline Hopping" and even on days when the spot news is world-shaking and space-con­suming, his chuckles are not crowded off.

Mike has created two original cartoon characters. He uses his deft artist's brush to keep "Emily and Mabel" ever in pursuit of a man and his thousands of follow­ers laughing.

The features of both men are now syndicated nationally; Head­line Hopping by General Fea­tures Corp., and Emily and Ma­bel by the Chicago Sun-Times Syndicate. But Ollie and Mike's present top positions in the news­paper field were not the result of any overnight success. There were many years of effort before they found their proper niche.

Strangely enough, their oppor­tunities came when editors of the Inquirer, during World War II and the postwar period, felt that some­thing should be done to lighten the seriousness of the news col­umns.

Mike was first to fill a specific need. He had worked around newspapers and did freelance for many years before he was "dis­covered" as a newspaper cartoon­ist by E. B. (Tommy) Thompson, assistant managing editor and fea­ture editor of the Inquirer. During the dark days of the last war, Thompson asked Mike to create a general panel which would "give people a laugh," and the artist welcomed the opportunity, because he had a feeling that even the comics were getting too serious.

Mike had joined the Inquirer in 1938 and his work included the Uncle Dominick cartoon for John Cummings' column. Being by nature a man who laughs a lot himself and gets a kick out of bringing a smile to others, Mike did not need much prodding from Thompson to launch the new fea­ture.

He started a general panel called "Funny Angles." Occasionally, two spinsters would appear, but they were so good that Emily and Mabel emerged as a separate fea­ture.

Emily and Mabel has given Mike a national reputation, but success came after years of hard work on other projects. Son of an Italian immigrant, he worked his way through several art schools after getting the urge to draw from a few months association with the art department of the old North American in 1918.

His ambition was to become a painter. He won two Cresson scholarships for study in Europe in 1927 and 1928 from the Penn­sylvania Academy of Fine Arts. He became interested in cartoon­ing, he said, because he "had to eat" and painting commissions were slow. When checks for some of his drawings arrived from national publications, he decided to devote more time to that art.

Still free-lancing, Mike started to do some work for the Philadel­phia Ledger in 1930, but never re­ceived much recognition as a newspaper cartoonist until Thomp­son thought he was the man to start a new and refreshing feature for the Inquirer. Mike has been clicking steadily with Emily and Mabel ever since.

Mike thinks up gags himself for the Emily and Mabel panel, but he also employs a gag man, Vin­cent Schiller of the Inquirer li­brary.

Mike likes to watch people reading his panels in trolley cars and subways. He says that when they smile over Emily and Mabel he feels good. That is the real purpose of cartooning, to make people laugh, he adds and con­cludes that social significance or propaganda should have no place in comic strips.

On the surface Ollie Crawford does not look a bit funny or hum­orous. If anything, the whole im­pression is one of dead serious­ness, but his Headline Hopping puts some hope into breakfast table readers who worry about the future of the world after they look at the news columns.
The feature originated with his assignment to do a daily column of highlights and sidelights on the Democratic and Republican na­tional conventions here in 1948.

Ollie had started his newspaper career as a sportswriter with the Atlantic City Press Union News­papers, transferred to the news side as desk assistant and rewrite-man. He joined the Inquirer staff in 1945, and covered many top, serious news assignments.

When he was asked to do the sidelights on the national conven­tions, he developed a new light style of writing and decided to try this technique on news sub­jects.

Tommy Thompson, the man who discovered Mike, gave a sim­ilar boost to Ollie. He passed his sample Headline Hopping col­umns on to Walter H. Annenberg, editor and publisher.
Annenberg, aware of the grim tone of the news, snapped up the idea for a humorous feature. The column was introduced on Novem­ber 6, 1948, and has been a regu­lar feature of the Inquirer ever since. It originally ran inside, now it is always used on Page One. In fact Headline Hopping is the first daily front page feature in the 122-year history of the news­paper, attesting to the popularity of Ollie's sharp comments on the news.

Recent syndication of Ollie's column has brought his unique humor to millions of newspaper readers throughout the country. Newspaper writers marvel at Ollie's ability to keep the gags flowing right on top of the news every day.

The column is not written in advance. It takes today's headline news story, develops it into slight­ly under 40 lines of wisecracks and epigrams for publication in the succeeding day's paper. The pro­cedure is to pick a story, rough up a column while commuting to the Inquirer office from Atlantic City, polish and write it for de­livery to the desk and syndicate (by wire) by 1 p.m. daily.

Comments:
Emidio Angelo was my uncle. This article is a wonderful find. Thank you!
Linda Angelo Reilly

Emidio D'Angelo, later Mike Angelo, was a founding member of The Da Vinci Alliance in 1931. Now The Da Vinci Art Alliance, we are celebrating our 80th year with a catalog in which I, as archivist, will have an article and would like to know in what year he passed away.
Thank you,
Rachel Citrino