News of Yore: Marty Links Tells Her Own Story 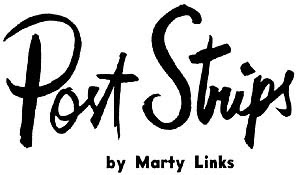 [from The Cartoonist, summer issue 1957]

Being a word-by-word account via New York and California of the correspondence between the editor and a contributor—the creator of "Bobby Sox"—our Miss Marty Links.

Jan. 3
Dear Marty:
Would you like to do a story for "The Cartoonist" about yourself, de­scribing your hectic and unglamorous role as mother and cartoonist? Please let me know.

Jan. 23
Dear Marty:
Just a quick note to give you a dead­line. I must have material by March 10th.
Many thanks, Alfred

Feb. 2
Dear Al:
Would it upset your schedule if I withdrew my proposed story? I'm so swamped with cub scouts, school ba­zaars, dripping noses, sore throats—and I haven't even thought up a Sunday page idea for this week! Anything I wrote for the magazine no one would believe anyway.
Signed, Desperate.

Feb. 10
Dear Desperate —
If you are too pressed—or too shy— to write about yourself, can you have someone else write a truthful story about you—perhaps your husband?
Signed, Very Desperate

March 5
Dear Marty —
Deadline looms. Are we going to press without the whole truth on our Marty?
Love, Still Very Desperate

March 6
Dear Alfred —
I airmailed a stirring story, exquisite­ly illustrated, over which I slaved for weeks! If it is lost I will kill myself!!!
Best, Marty

March 8 Via Western Union:
DON'T! STORY ARRIVED. ALL IS WELL. THANKS A MILLION.
LOVE, ALFRED

March 5
Dear Alfred —
As a female cartoonist the only differ­ence between me and other housewives is that I draw instead of making beds and doing dishes. And drawing is more fun.

I have three children. Alex, eight, Elizabeth, five, and Victoria, three. In addition to these adorable, beautiful and loathsome children, I have one husband. Handsome, kind and understanding, his name is Alex Arguello and he is an at­torney in our home town of San Fran­cisco. We are both natives. Alex's great-great-grandfather was first governor of California. I met my husband the first day of high-school. He wore his hair parted in the center and was a sopho­more! 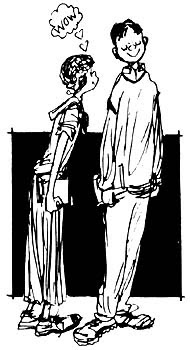 We were married some years later when he was in law school. When he entered the Navy and went overseas, I already had been drawing weekly car­toons for the San Francisco Chronicle for a year or so. From the back of a book on how-to-cartoon, which he had given me as a gift, I found a list of syn­dicates with addresses. This gave me the idea of writing to them. I received an­swers from all, even one syndicate which wrote it also sold art courses ac­companied by real nylons (this was war time, remember).

I decided that Joe Agnelli of the Bell Syndicate had written the nicest, most pleasant letter, so I signed with them and have been associated with them ever since.

Larry Fanning (who is now with the Chicago Sun-Times Syndicate) was my boss on the Chronicle, and due to the fact that he didn't fire me when he should have, I had many samples of work in print to send out. George Lichty also has been a great help, advising me many times and steering me in the right direction.

Also involved in all this were a few lucky breaks, which is a good basic fac­tor to start with in any career. Mine was in coming up with the idea of a teen­age cartoon just as the public was be­coming aware of that particular age group. Jeans, bandannas, sloppy shirts and Sinatra were their trademarks and they became mine. A good subject for gentle humor. 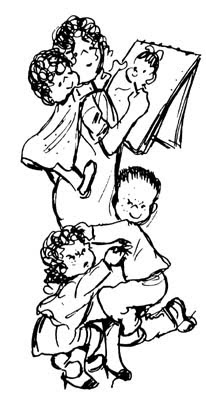 Here's how it goes. Running the house, husband and three children come before drawing. Although there is a question of who runs what. As soon as Elizabeth and Alex are off to school, I sit down in my studio—which is a sunny, pleasant room off the kitchen, overlooking the laundry room—and start to draw feverishly. When school is over (which is much too soon) and the children arrive home with their lit­tle friends, everything starts going down-hill.

Elizabeth is still in kindergarten so the working day actually consists of only two and a half hours. After that I draw intermittently all through the rest of the day, grabbing ten minutes here or there whenever possible. The baby alone is no trouble, but the others love my studio and the baby does every­thing they do. They spend the after­noons at my desk, using up good paper, ruining brushes or anything else they can lay their hands on.

When I first started with the syndi­cate, I drew only daily panels. After we sold to a few papers, they asked for a Sunday page. This was impossible to handle alone, so Jerry Bundsen and Ted Martine came into my life.

Jerry, who works for the San Fran­cisco Examiner with Herb Caen, the columnist, has been writing my daily gags for eleven years. Once a week he sends me a large batch of gags from which I select what I want and like. If there aren't enough to make up a week, I fill out with my own ideas-which drives Jerry mad! He claims if he sent me sixty gags I would be unable psy­chologically to select more than four out of the bunch. This isn't so at all.

After selecting the four best gags, I pencil in the whole week of dailies. These go to Ted Martine, the world's best artist (I should be working for him). He inks in all the pencilled backgrounds. When they are returned I ink in the figures. I have pencilled them in rough enough so that I change as I go along. This keeps the action loose and fresh. In addition I draw from models constantly, then use the sketches as ref­erence. With the outlines of the furni­ture inked, for instance, I add details like prints and upholstery, flowers in bowls, fringe on curtains, etc. My hus­band claims I can't stand a plain white space. But it's this detail which gives a homey touch. As a matter of fact I draw all the furniture in our home. I often think I'd like to recover the worn up­holstery in a popsicle-colored back­ground so the popsicle stains will not show.

As to the Sunday panels, these I dream up myself, and it is more work than everything else put together. I feel each idea is the last one I'll ever be able to eke out. Also I meditate (or should I say brood?) on my own girlhood, which was a long time ago, believe me. But once the mind starts going back it's amazing how much it remembers.

In addition, some ideas come from parents of teenagers, sometimes from a teenager who will call or write about some funny experience.

Well, Alfred, this is the end of the fascinating, stimulating, glamorous story of a career woman versus marriage. From now on if anyone should ask you if they mix, refer them to me. I'll tell 'em!

I am Marty's daughter-in-law and widow of her son, Alex Arguello. Thank you so much for this information. No one in the family has this correspondence and it is precious to us.