Obscurity of the Day: Honor Eden 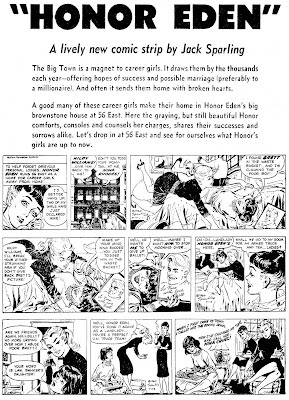 In 1960 the McClure Syndicate was on its last legs but still in there swinging. In a desperate attempt to appear hip one of their last original offerings was Honor Eden, a soap opera that tried to capture a youthful flavor with cool cats and hip lingo.

The 44-year old Jack Sparling created the new strip in 1960 and he apparently thought this was going to be the big one after a string of less than stellar syndicated outings. Alas, 'twas not to be. Between a weak syndicate, snappy patter that was probably unintelligible to most of the newspaper-reading public, and a subject that was similar to an already successful strip (On Stage) and Honor Eden didn't stand much of a chance.

As capsulized in the promo above, Honor Eden was a housemother to a group of girls trying to make it in the big city.

The strip started either in January 1960 (according to Leiffer and Ware's E&P index) or April 11 1960 (the start date in my samples from the San Francisco Chronicle). The strip was advertised in E&P until 1963 but good luck finding any that late -- this is one very elusive strip. One reference claims that the feature lasted until 1972, which is patently ridiculous.

Comments:
Hello, Allan----I would assume this strip didn't begin in January, and that April 11 was indeed the start date. The three examples the syndicate provided are dated April 11,12, and 13. These have to be the first three dailies, as they are pure "situation exposition", introducing names, the building, where they came from, the boyfriend, etc, etc.--------Cole Johnson, playing his zither.

I wonder if Will Eisner, who was at tat time running McClure, was in any way involved. He always said he ddn't do much in comics and was prouder of his success in securing certain columnists. But then again, he wasn't the man to mention his failures...

Or ws he there later? He was with Bell-McClure...

I came across this post when I found a quote about this strip in an online biography of Alex Kotzky. There they state that the start of Apartment 3G was postponed eight months because of a 'similar soapy' called Honor Eden - which doesn't seem to imply a long run. For what it's worth: on Google News I found the strip in the Ottowa Citizen. They have a spotty collection in March and no April issues, but the strip is not there in late March and it is in early May. The last one they ran was on September the 10th, at the end of a storylne, with the last panel indicating the start of a new one.