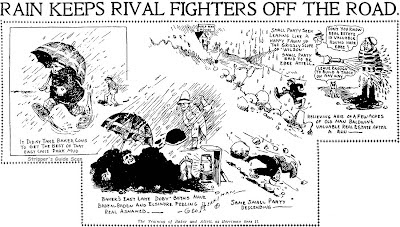 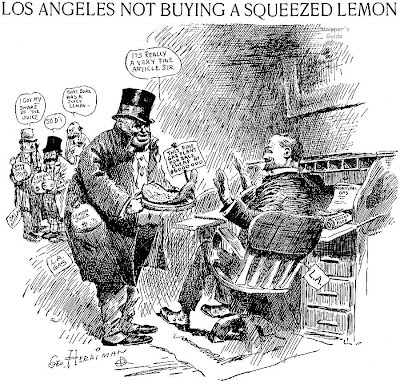 Herriman continues to chronicle the saga of a rainy January 1907, first with a sports cartoon on the 15th. Abe Attel and Harry Baker, preparing for their fight on the 18th, are having trouble getting their training done in the rain. This is Herriman's only cartoon on the fight between Abe "the Fighting Hebrew" Attell and Harry Baker so I'll let the cat out of the bag that Attell cleaned Baker's clock.

On the 16th we have a cartoon that serves to remind us that electric powered vehicles were common in the early days of the automobile. Enough so, in fact, that the auto show put together an electric light display as part of the attraction. But who are J. Hazen Hyde and Leon Tomaso Shettler??

Herriman then takes a couple days off, returning on the 19th with a pair of cartoons. The first is a graphic memorandum of a local fishing club meeting. Not anything terribly interesting here, so I'll take the opportunity to tell a Bible story (no, really!). If you read a lot of cartoons from the early part of the century you'll see the name Ananias bandied about quite a bit, like here. Unless you're well-versed in Bible lore this might be a stumper for you.

Ananias was a fellow who had some land for sale and he promised the apostles that he'd give all the profits to them. Once the land was sold he got greedy and decided he'd like to hang on to a bit of that dough. So he went to the apostle Peter and handed over a portion of the loot, claiming it was all the profit from the sale. Peter smelled a rat and told Ananias that it would have been hunky-dory for him to hold out on the Lord, but he was gonna fry for lying about it. Ananias drops dead on the spot, smited (smote? smitten?) but good.

So when you see these references to Ananias in old cartoons, and they do pop up constantly, translate it to a foolish liar.

Final cartoon continues the story of LA's gas supply woes. This cartoon implies that the Los Angeles Gas Company offered itself up for sale for municipal ownership. I can't find any contemporary news stories that mention this, but it's a definite possibility because a new rival, City Gas Company, was at the moment setting up shop in L.A. The new company, though, turned out to be weak competition even for the fouled up LA Gas Company. I'm sure we'll be seeing more cartoons on the subject from George.