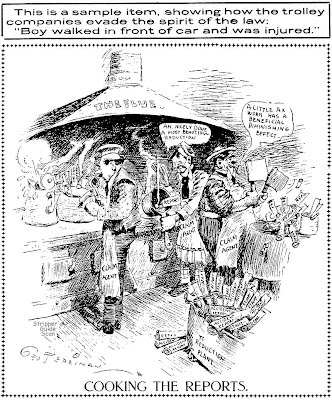 This week's Herriman Saturday features the master's output for a single day. All three cartoons above ran on Sunday, February 3 1907 ... and two of them were full page width extravaganzas to boot. Herriman must have been working on asbestos drawing paper to avoid combustion from his flying pen.

At the top we have a boxing cartoon -- interesting thing about this one is that Herriman appropriates Tad Dorgan's character Bunk on the right side. Dorgan used this canine mascot frequently as a commentator in his sports cartoons, and also did a sporadically appearing comic strip usually titled And His Name Was Bunk. I guess Tad had a storyline going with Bunk that Herriman wanted to get in on.

Next Herriman shows us that he's no stranger to the kitchen, using sauce reductions as a metaphor for trolley companies that refuse to take responsibility for accidents.

Finally Herriman previews the 1907 Altadena Hill Climb event, a popular sport back in the early days of the automobile. A few hill climb events do survive, like the famous Pike's Peak race. The 1.5 mile course in Pasadena was first used in 1906, and the last hill climb held there was in 1909. The course was considered rather dangerous, what with a railroad track crossing that drivers would routinely hit and go airborne, parts flying off everywhere as they thudded back to earth.