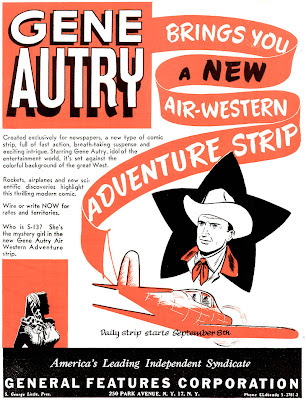 Anyone who says Western comic strips are fading out—and some syndicate people have been saying just that in recent months —will find folks who strongly dis­agree with him up in the New York offices of general Features Corp. for General has just announced with much bally­hoo a new "Gene Autry" strip to be offered to newspapers this Fall, and executives at the syndicate confidently speak of building the strip into one of the nation's top comic features.

But "Gene Autry" won't rely on a Western story line alone for its audience appeal. In fact, the strip is something of an "all things to all men" proposition. It will feature, besides the cowboy angle, conventional airplanes, jets, rockets, guided missiles and such. The first sequence starts right off with a foreign agent's episode complete with "beautiful mystery girl." Gimlet, a bearded sidekick to the hero, provides comic relief. All sections of the comic strip audience seem to be provided for.

The strip has the magic of the Autry name, of course, and Gen­eral Features expects to benefit from scads of tie-in promotion. Since Autry came to New York with his guitar and a ten-dollar bill 17 years ago, he has made more than 450 phonograph re­cordings with sales of 37,000,000 records; a network radio show has been on the air for 12 years; 32 television stations carry Gene Autry shows, and six full-length motion pictures have been pro­duced this year. The aviation as­pect of the strip will be promoted on the cowboy star's personal ap­pearance tours, for Autry, a World War II veteran of the Air Corps, pilots his own private plane. In addition, the Gene Autry label has about 60 product tie-ins.

The new strip is being pro­duced for General Features by the Whitman Publishing Co., a division of Western Printing and Lithographing. Artist is Tom Cooke, a veteran of comic mag­azines, commercial art and the Marine Corps. A native New Yorker, Cooke now lives in Big Bear, Calif., where many of the Autry television productions are shot on location. Like Autry, Cooke is a qualified aviator. The strip will be written by Phil Evans, whose background includes free-lance writing, movie scripts, comic magazines and other strips.

"Gene Autry" is scheduled for Sept. 8 release as a six-a-week feature in four and five-column size. A Sunday color page is planned.

Comments:
Any idea who now owns the copyright for the Gene Autry and Roy Rogers strips? Whitman, which produced them, the stars who licensed their likenesses, or the syndicates that distributed them? Any chance they'd be public domain? Sure would like to see these reprinted, but first step is who holds the rights.

while I havent seen any of this 1952-1955 Gene Autry strip, the Gene Autry and Roy Rogers comic books were copyright by the stars (or their companies) - not by Western / whitman.

Hi Penn -
I recall that Gene Autry, and most of the other strips trading on actors' names, were copyrighted to the stars. Whitman, General Features and so on were just being granted distribution licenses, while the stars retained copyrights. As I understand it Autry was a pretty shrewd businessman, so his estate probably still owns all the copyrights.