Obscurity of the Day: Duke Handy 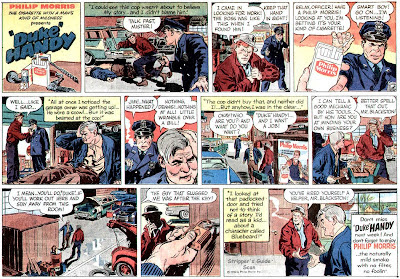 Cigarette advertising in Sunday comics had been going on in earnest since the early thirties, often featuring sports and entertainment stars lavishing praise on the ol' coffin nails, going so far in some cases to claim that cigarettes were their secret weapon against the competition (good exercise for the lungs, dontcha know).

In 1958, Philip Morris decided they might recruit more young 'uns if they produced a continuity strip for the funnies -- the result was Duke Handy. A two-fisted blue collar he-man, Duke went through life kickin' ass, takin' names and huffin' butts. The sample above, which I think is the second in the series, has Duke getting out of hot water with a touchy cop by offering him a smoke. I'll have to remember that trick the next time I'm pulled over for speeding.

The series was a six month affair that started on April 6 1958 and ran until September 14. Some sources claim it ran until October, and an E&P article of the time had it planned to go to the end of the year, but the strip for 9/14 seems to conclude the series. I'm happy to hear from dissenters on the dates.

Duke Handy was written by veteran strip dialoguer Allen Saunders, ably teamed with artist Alex Kotzky. One source says that Kotzky got the job when Milton Caniff backed out, but this factoid isn't in Harvey's bio of Caniff, so I'm going to guess it's more legend than fact.

The Duke may not have lasted very long, but he was not forgotten. The feature merited special mention in a 1997 Surgeon General's report on preventing tobacco use by young people, cited as one of the most obvious instances of the tobacco industry trying to recruit kids as smokers.

Comments:
I have to go upstairs to check my dates... I have almost all of the run and someday soon I am going to run them all on my blog. I like this strip and I think it has some of the best work Alex Kotzky ever produced.

PLEASE, PLEASE, PLEASE! Run them on your blog!!! I would love to see the entire run of Duke Handy! ALex Kotzky was one of the greats! Duke Handy is an extremely interesting advertising comic!

Hi Dan -
Given that it's an advertising comic for a product that no longer exists (they don't sell that brand anymore, do they?) I doubt that any legal eagles would have a problem with me running the whole series.

Unfortunately I only have a few samples in my hardcopy collection. The dates I cited in the post were based on my microfilm research of the Washington Star. If someone wanted to loan me sharp 300 dpi scans or a collection of tearsheets I suppose I'd be willing to scan and clean them for all to enjoy.

That would be great, Allan! Your blog really is a special place for fans and creators of comic strips.