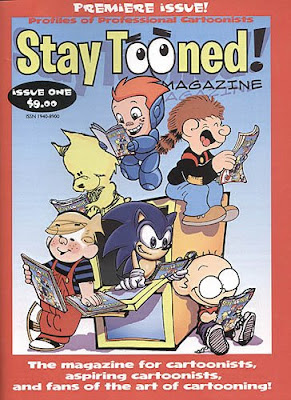 I think it's safe to say that most regular readers of this blog were fans of Jud Hurd's Cartoonist Profiles magazine. The venerable CP was laid to rest along with its founder, and both he and his magazine are sorely missed. But now we may have a worthy successor in Stay Tooned. Editor John Read is unabashed in voicing his desire to take up Hurd's mantle, and if this first issue is an indicator of what's to come Jud Hurd would definitely approve.

Read is following the Cartoonist Profiles model very closely, and where he strays he usually improves. The layouts in CP often resembled a pasted up scrapbook, whereas Stay Tooned has a slicker, more professional look. The samples of cartoonists' work, which in CP were sometimes limited to clippings from a cartoonist's standard portfolio or syndicate sales book, are more thoughtfully chosen here. Stay Tooned is what I believe Jud Hurd would be publishing today if he were technologically adept and full of youthful exuberance .

Just like a typical issue of CP, the selection of subjects for this first issue make for a nice grab-bag -- something for every interest. Some familiar names are interviewees, like Marcus Hamilton (Dennis the Menace), Scott Stantis (Prickly City) and Steve Kelley (New Orleans Times-Picayune editorial cartoonist). But then we also get John Deaton, a cartoonist and graphic designer who runs a sign shop in a small town, and Rob Corley, an animator who started his own business when Disney shut down the animation unit where he worked. Both these gents have some very interesting insights to share. Jud Hurd 's magazine was squarely aimed at aspiring cartoonists, and he recognized that not everyone is going to be the next Charles Schulz -- articles about the less glitzy cartooning disciplines were an important part of his magazine and Read evidently shares his philosophy. Aspiring cartoonists take note that there is more to cartooning than sending off submissions to King, United and Universal.

Each article is adorned with lots of examples of the artists' work -- especially welcome are the many roughs and pencil sketches, something we didn't see nearly enough of in CP. The interview questions, while by necessity somewhat formulaic (how did you get your start, what are your materials and methods), are knowledgeable -- I enjoyed the variety of answers Read gets to one of his standard questions, "who was the first pro cartoonist you met?" Of course there's a column by the great R.C. Harvey, who must be juicing to keep those typing fingers clattering away at such a pace. There's also some fun quickie items including a rant about beginner cartoonists from Daryl Cagle and a hilarious e-mail exchange submitted by Brad Fitzpatrick.

The magazine does have a few minor bugs that need to be worked out. The margins are so tight that many pages seems like a balloon ready to burst, and an occasional lettering SNAFU has a habitofturningwholesentencesintoonebiglongword. My copy of the first issue had about a half-dozen pages duplicated and out of order. And I blanched to see one of my biggest pet peeves, totally unexpected in a cartooning magazine -- it's Winsor McCay, not McKay!

A pretty big mistake, in my opinion, is the very name of the magazine. When I heard that there was a new magazine coming out called Stay Tooned I paid no attention assuming it was a fanzine about anime or Saturday morning animation. I had no inkling that a magazine with that title might be of interest until I was actually handed a copy and paged through it. I think a more descriptive title could only help sales. And speaking of sales, there's no subscription form in the magazine and no indication of the intended publishing frequency.

If I had my druthers I'd like to see an article in each issue focusing on the history of cartooning. Jud Hurd was pretty good about throwing us a bone in that regard, and it certainly doesn't hurt the aspiring cartoonist for whom the magazine is intended to see some work by great cartoonists of the past. Articles and interviews with syndicate personnel, newspaper editors and such (let's call it the loyal opposition) would also be instructive.

Congratulations John Read on what I hope will be a long-lived and prosperous magazine. You've got one in the can, so only 145 more issues to catch up with ol' Jud -- get cracking!