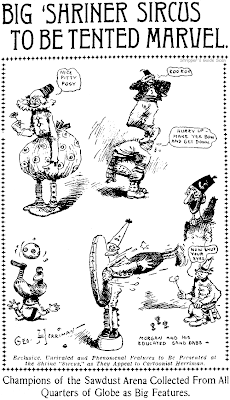 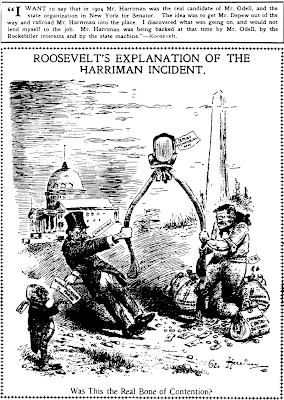 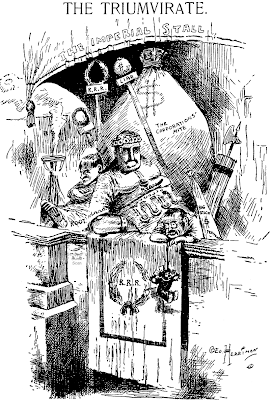 Our first cartoon this Herriman Saturday is from April 3 1907. The Shriners Circus (or Sircus as they insist on spelling it here) originated in 1906 in Detroit and this may be the first year that they took the show on the road. The associated article describes dozens of acts, but the standout has to be Oscar Morgan who, it is claimed, commands a troupe of trained seafood. "The great Morgan presents a school of trained fish and lobsters with sand dab clowns. Mr. Morgan has this finny menagerie under perfect control and the work of the sand dab quartet is marvelous in its intricacy." Wow! Sand dabs, by the way, are a flounder-like flatfish.

On the 4th and 5th Herriman pens cartoons about a long-simmering scandal in which Teddy Roosevelt supposedly requested a large campaign war-chest contribution from E.H. Harriman to help the Republicans in the 1904 elections. A letter had just come to light in 1907 in which Harriman made pointed claims about Roosevelt's involvement. You can read an excellent summation of the situation in this 1911 New York Times article. The microfilmed newspaper had a badly discolored patch through the lower half of the April 4 cartoon -- I started in to restore it but then got on my high horse about the anti-Roosevelt stance. TR is as close to a political hero as I've ever had, so I decided to heck with it -- leave it as muddy as the thinking behind it.

Comments:
The thing I find interesting in the "triumvirate" cartoon at the bottom is the use of the teddy bear (or perhaps Teddy Bear). This wouldn't have been too long after Berryman's famous "Drawing the Line" cartoon, and Herriman's snarky use of it shows just how much the image had stuck by early '07.