News of Yore 1952: Weinert Takes the Reins on Vignettes 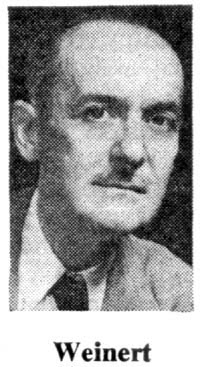 Harry Weinert this week joined the list of distinguished artists who have created the "Vignettes of Life" Sunday color page in the course of its 30-year history as a newspaper fea­ture. He succeeds the late Kamp Starrett, who drew the feature for 12 years until his death in July.

Others who have handled the feature since Charles D. Mitchell founded it are Frank Godwin, who now draws "Rusty Riley" for King Features Syndicate, and the late J. Norman Lynd. The feature was distributed by the Ledger Syndicate, Phila­delphia, for many years, but has been a General Features Corp. property since 1949.

Mr. Weinert has studied at the Corcoran Art School in Washing­ton, D.C., and at the Pennsylva­nia School of Industrial Art. He has contributed freelance work to the Philadelphia Record, the In­quirer, Esquire and the Saturday Evening Post. For a time he was on the art staff of the old Phila­delphia Ledger.

Mr. Weinert hopes to modernize somewhat the style evolved for "Vignettes" by his predecessors, without interrupting the feature's gently satirical nature or otherwise alienating the fans it has gathered in its long history.

[I question one part of this article -- it states that C.D. Mitchell originated Vignettes of Life, but according to my research Mitchell created Follies of the Passing Show in 1918 for the Ledger and left it in 1920. Lou Hanlon continued the feature until 1931. While Hanlon was continuing the feature, which lost its title in the 20s, Godwin started Vignettes in 1924. The features were essentially identical in subject -- the only real difference is that Vignettes was a full color page, Follies was a black and white half. I could very well be missing something here but I think they were two distinct features, but perhaps there is some connection between the two that I'm missing. Anyone else have an opinion on this little mystery? -- Allan]

Comments:
Sorry I don't know anything about Lou Hanlon, Alan. This is OT, but, I'm dying to know what you think of the new LITTLE ORPHAN ANNIE reprint book. I'm getting quite a kick out of reading it, all the dailies from the first through Oct. 1927. Reproduction for the most part passable to excellent, many strips reproduced from the original artwork! Very few Sundays are included, just the ones crucial to continuity, although I felt the lack of the Sunday in a few cases. Overall, I give it an A-. What do you think?

Hi Mark -
I'm reading the book right now and will be posting a review soon.

I too remembered that Godwin started it, but The Comic Strip Project says that Mitchell started Vignettes in 1913 and Godwin got it in 1925