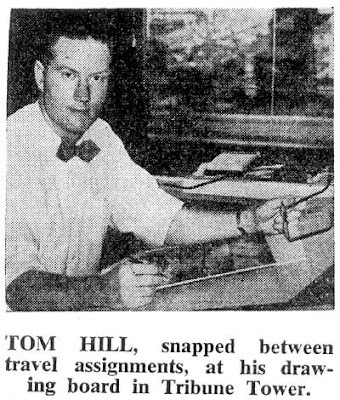 [Editor's Note: I scanned this article thinking this was the Tom Hill who worked on Mark Trail for many years -- turns out it isn't. Can't throw away a perfectly good article, though, so here it is. You can visit this site to see examples of this Tom Hill's work.]

Tom Hill Is Traveling Artist for Chi. Tribune
By George A. Brandenburg (E&P, 1952)

Chicago — Travelin' Tom Hill, six-foot, red-headed artist for the Chicago Tribune, is equally adept with his sketchbook in a GI fox­hole in Korea, or on the banks of the lazy Wabash in Indiana.

When Tom gets an assignment from A. M. (Mike) Kennedy, Sunday editor, he bundles up his sketchbooks, brushes and water colors, and he includes a notebook and pencils along with a small camera loaded with color film. He recently accompanied Wayne Thomis, Tribune aviation editor, to Japan and Korea, for a five-week tour, spending a week at the front with American GI's.

Writes His Own Captions
Tom's black and white sketches, illustrating Wayne's articles, ap­peared in the daily issues of the Tribune. Tom's impressions of Korea and Japan in water colors have since been published in the Sunday Tribune's "Grafic" maga­zine section. He writes his own "captions" for his illustrations.
Young Hill's doubletruck in color dealt in sketchbook style with American GI's in Korea. "These are things our boys are seeing every day" wrote Hill. Then followed his illustrations of Kore­an women washing clothes in a stream, the re-fueling of an Amer­ican jet fighter plane, a Korean farm scene, and American soldiers in an observation post "up front."

His impressions of Japan fol­lowed the next Sunday in the Grafic section in another color doubletruck. The busy street scenes in Tokyo were to Tom's liking. "I prefer to paint the life around me, places and people as I see them rather than any specific sub­ject," he explained. "I'd rather do a street than a house, and the men, women and children walking, working and playing in that street than any individual."

Served in Navy
Tom Hill, born 30 years ago in Texas, has been a Tribune artist for the past five years. Prior to coming to Chicago he had lived in California and Hawaii. During World War II the big redhead finally got in the Navy, although assigned to limited service because of ear trouble developed in boy­hood. He served as a Naval visual aid artist in Honolulu, where he held his first one-man show at the Academy of Arts. He has since held seven one-man shows of his work and has exhibited in the Chicago Art Institute, the Nation­al Galleries in New York and other places. His latest one-man show, devoted to his Korean and Japanese paintings, opened at the Chicago Artist Guild's club rooms in late August.

Hill told E & P that he has been drawing and painting since before he can remember. He was going to art school in Los Angeles when the war started. When the Navy first turned him down, he went to work for an aircraft factory, draw­ing illustrative material showing how to assemble aircraft parts. Upon returning from service after the war, he served as assistant art director of the Universal-Interna­tional Art Studios in Hollywood.

Likes Travel Assignments
During the past five years, Tom Hill has not only been having fun, but has "come up" with plenty of good illustrative material. He liked the travel assignments given him by the Sunday editor. These first included New Salem, Dubuque, Southern Indiana and the Ohio River Valley.

He works almost entirely in water color. He explained, how­ever, that while at the scene he often makes quick sketches and uses his color camera "as a tool" to capture the color and detail. When he gets back to the Tribune, Tom functions much like a report­er; he finds out what space the editor has planned and then selects and paints his illustrations to fit the space assigned.

Paintings Can Interpret
"Painted illustrations interpret," he said. "Color photography is a literal translation. An artist can give the illustration a little more interpretation and imagination. While I paint realistically, I don't try to copy like the camera would.

"The camera is impartial. The artist can be selective. His paint­ings can be very interpretive and individualistic in their presenta­tions of scenes and people."

In addition to his art work for the Grafic section, Mr. Hill also does illustrations for the Tribune's travel sections in color. In fact, he likes being an "artist correspondent," going to the scene and com­ing up with "feature stuff that is of news interest."
Doubles in Water Colors
Scheduled for an October issue of the Grafic is Tom Hill's double-truck painting of how Chicago's new Outer Drive extension is go­ing to look. He continues to "double in water colors," dividing his talents between editorial and advertising art. He also does black and white advertising illustrations.

Sixteen of his water colors, de­picting scenes from Guatemala, Canada and the Hawaiian Islands, hang in the Well of the Sea dining room at the Sherman Hotel. His wife, Wanda, is a well known tex­tile designer.

Their baby son, Tom says, has kept them from traveling to "far away places" in recent years. That's why the Northwest Air­lines "press flight" via the Great Circle route to Japan early this spring appealed to Tom Hill, who became an accredited war corre­spondent (shots and all) so that he could accompany Wayne Thomis on a "side trip" to the Korean front. They call him, "Travelin' Tom," at the Tribune.

Hill is also well known for his oil portraits of Chicago Press Club presidents, whose pictures hang in the club's quarters in the Sheraton Hotel.