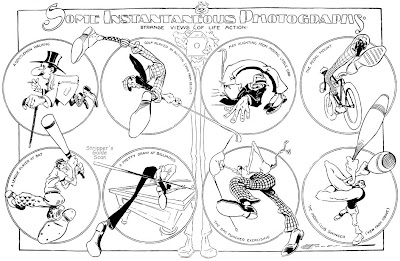 What you see above is the only reproducible sample I've been able to come up with for one of the greatest yet most mysterious and obscure cartoonists I've ever encountered. Even his name is a mystery -- is it C.E. Toles? T.E. Coles? Something else? From his signature you really can't tell for sure. Ohio State University's index of Bill Blackbeard's collection gives the name as C.E. Toles, but I don't know if that's based on anything more than a guess.

I first encountered this cartoonist's work in the early sections of the Philadelphia Inquirer, but chances are that his work there was reprinted from the New York Journal. Work by Toles is found in the pages of that Hearst paper in the late 1890s -- the sample above was from 1898 -- and he, as did many cartoonists of the times, specialized in one-shot work. And what work it was! Look at the tremendous but seemingly effortless perspective work above and keep in mind that this piece I'm reproducing is chosen only because it's the only one I have in hardcopy. Practically everything Toles did was a masterwork of this caliber or even greater!

The only series I know for certain he did was The Reverend Fiddle D.D. which ran for three months in the New York Journal in 1898. A later series titled The Reverend O. Shaw Fiddle D.D. ran in the Philadelphia Press for three months in 1901, but I haven't been able to compare the two side by side to determine if they are actually two separate series or if the Press version is just reprints with a longer title.

According to OSU's database Toles also did a lot of work for the New York Herald in 1896. Alfredo Castelli's Here We Are Again adds to our tiny knowledgebase with the information that he was doing editorial cartoons at the Washington Post in 1894. He also cites another series, Miss High Kick, in the New York Herald in 1896 but the info is pretty sketchy (not to mention in Italian). Here's a very minor effort, a spot cartoon, by our man Toles on Yesterday's Papers.

So who the heck was this guy, and what did he do with the rest of his life? Surely a cartoonist of his caliber didn't switch professions and spend the rest of his existence as a butcher! I know only of his work from 1894-1901 -- does anyone know anything more about the man or his work?

EDIT: Sara Duke at the Library of Congress has solved the mystery! The fellow's name is T.E. Coles, as evidenced by a byline in an 1895 issue of the Comic Sketch Club. This appearance further tells us that Coles was being syndicated by the International Syndicate of Baltimore at that time (Comic Sketch Club was the 'periodical' containing the weekly press proofs of their syndicate offerings).

Comments:
Hey, I found your site tonight when I did a search for CE Toles. I have very recently become intrigued by his work myself after finding many cartoons and caricatures of his published in issues of the Portland Oregonian newspaper from 1900 while doing research for a comic I'm working on. I printed some out and will be posting them on my website in the next day or so if you're interested in seeing more of his work.

Cool stuff, BT! These would have been syndicated out of New York. Having brought up the subject of Toles with other microfilm mavens, I'm impressed at how everyone who encounters his work remembers it. It's easy to just flip by cartoons as you're looking for whatever you're looking for, but Toles brings you to a screeching halt every time. His work is just bursting with life, demanding to be noticed and savored.