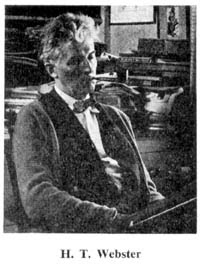 Harold Tucker Webster, for 50 years a newspaper cartoonist and one of the best-known mem­bers of his craft, died Sept. 22 of a heart attack on a train en route to his home at Stamford, Conn. He had celebrated his 67th birth­day on the previous day.

The Herald Tribune Syndicate, which distributed Mr. Web­ster's daily panels to about 120 newspapers and his Sunday "Timid Soul" feature to about 30 papers, announced that the car­toonist had left a large enough backlog of completed work to permit distribution to client news­papers until next April. Sometime before then the syndicate will de­cide whether to terminate the fea­ture or continue it under Herb Roth, Mr. Webster's assistant.

16,000 Panels
In the course of his long career Mr. Webster drew over 16,000 single-panel cartoons, and contrib­uted to the language such phrases as "the thrill that comes once in a lifetime," "life's darkest mo­ment" and "the timid soul."

He made the name of his chief char­acter, Caspar Milquetoast, a house­hold word in America.
Though known primarily as a humor panelist in recent years, Mr. Webster made his early repu­tation as an editorial cartoonist on Midwestern newspapers. His most famous drawing, still reprinted an­nually on Lincoln's birthday, was executed in 1918, when he was on the staff of Associated Newspa­pers. It was captioned "Hardin County—1809," and showed two
backwoodsmen having the follow­ing conversation on a country road:

"Nuthin' a tall, nuthin' a tall 'cept for a new baby down't Tom Lincoln's. Nuthin' ever happens out here."

Mr. Webster's humor panels fol­lowed a set weekly pattern, formed some years ago. On Mondays the topic was "The Timid Soul"; Tuesdays, "Life's Darkest Mo­ment"; Wednesdays, "The Unseen Audience"; Thursdays, "How to Torture Your Wife" (or hus­band); Fridays, "The Thrill that Comes Once in a Lifetime," and Saturdays, "Bridge." For his "Un­seen Audience" panels he was once described as "possibly radio's most effective critic," and in recent years their sting was felt by tele­vision too. In 1950 they won for him a special Peabody award.

Cartooning, Smoking
H. T. Webster was born in Parkersburg, W. Va., and spent his boyhood in Tomahawk, Wis. His childhood surroundings were often depicted in "Life's Darkest Moment" and "The Thrill that Comes Once in a Lifetime" car­toons. At the age of seven he formed two lifelong habits — car­tooning and smoking.

When he was 12 he graduated from cigarettes to cigars, and sold his first cartoon for $5 to Recrea­tion magazine. Five years later he left high school and Tomahawk to study art at the Frank Holmes School of Illustration in Chicago. The school folded shortly after his arrival and, after a brief and un­successful fling at freelancing, the young cartoonist joined the art staff of the Denver Post.

In the next 10 years H. T. Web­ster's drawings appeared in the Chicago Daily News, the Chicago American, the Chicago Inter-Ocean and the Cincinnati Post. He did mostly illustrations and political cartoons, but on the Post began to dabble in the humor and human interest panels which were later to become his stock in trade. One series, "Little Tragedies of Childhood," was the forerunner of the "Life's Darkest Moment" panels.

Worked in Advance
In 1911, after a trip around the world, Mr. Webster was hired by Associated Newspapers in New York. Though his contract called for political cartoons, he turned increasingly to human interest topics, and these were enthusiasti­cally received by readers. For the New York Tribune from 1919 to 1923 and the New York World from 1923 to 1931 he abandoned serious editorial cartooning almost completely. He joined the Herald Tribune and its syndicate in 1931.
As demonstrated by the seven months' supply of cartoons now on hand, Mr. Webster had a penchant for preparing work far in advance. In 1927, while preparing for a va­cation, he undertook to supply the New York World with three and a half months' material in one month. The strain of continuous drawing lost him the use of his right hand, and would have ended his career had he not learned to draw equally well with his left. At this time Herb Roth, a World car­toonist, joined Mr. Webster as his assistant. Mr. Webster continued to do pencil sketches and to ink in the characters, while Mr. Roth inked in the background details. This arrangement continued until Mr. Webster's death.

Comments:
No comment, but I have a question for you regarding H.T. Webster:

Did he have three sons? Was he involved with the Boy Scouts?

I'm doing research on another syndicated individual, and the information would be helpful.

Hi Christie --
Offhand I don't know, but there is more biographical info on Webster in "The Best of H.T. Webster", a book issued by Simon and Schuster in 1953, still widely available on the used book market.