News of Yore 1952: Napoleon Moves to the Coast 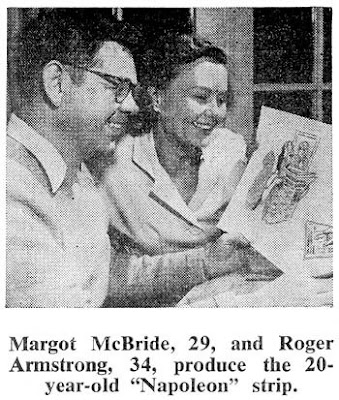 The "Napoleon and Uncle Elby" strip, one of the old-timers on newspaper comic pages, gets a new syndicate outlet next month. Mir­ror Enterprises Syndicate, Los Angeles, will handle distribution of the strip beginning with the daily release for Oct. 13 and the Sunday release for Oct. 19. Lafave Newspaper Features, Cleveland, has serviced the strip since its inception 20 years ago.

"Napoleon" nearly wound up on the scrap heap of dead newspaper features last year when its original creator, Clifford McBride, died. Subscribing editors, aware of the strip's distinctive art style and old-time flavor, saw little possibility of its continuation. But Margot McBride, the artist's widow, was determined not to let the strip die.

She hired Roger Armstrong, a former student and assistant of her husband's, to draw the strip, and herself took on the job of conceiving ideas, writing dialogue and supervising the art work. To­gether they maintain the style of Mr. McBride's old-time art and humor, despite the fact that Mrs. McBride is 29 and he 34.

As proof of their success Rex Barley, manager of MES, cites the fact that some papers which dropped the strip at the time of Mr. McBride's death have re­turned to the fold, while new ones have been added.

Comments:
Not on today's topic...
With the death of Jack Kamen, I was wondering if his (and George Thatcher's) comic strip "Inspector Dayton" ever appeared in newspapers.
I notice you don't have it in the Mystery Strips, but I haven't found anything to assure me that it actually ran in the papers.

the only comment I can make it that Mrs. McBride was nine when Napoleon started? hmm....
refresh our memory how long did it run by Armstrong?

DD - After an initial run in 1938-39 the Eisner-Iger shop's Inspector Dayton strip was later advertised in E&P in 1942, 45-46, 48-50 by Pan-American Press Service as a daily and Sunday feature. It was still credited to George Thatcher and I've never found it running anywhere. I have a photocopy of the original art to one daily from this period which does indeed have Jack Kamen art. My guess is that it was actually being produced and was running in some foreign paper(s).

The feature was advertised one more time, in 1974, by Jerry Iger's Phoenix Features, obviously now offered in reprints.

Steven - Napoleon was put down in 1960. And I don't know if Clifford had himself a child bride or if Margot subscribed to the Jack Benny school of age reporting. From the grainy pic I'm gonna guess the latter.

in the for what it's worth department, she wasn't the first bride of McBride. I havent been inspired enough to see what happened to the first Mrs. McBride.