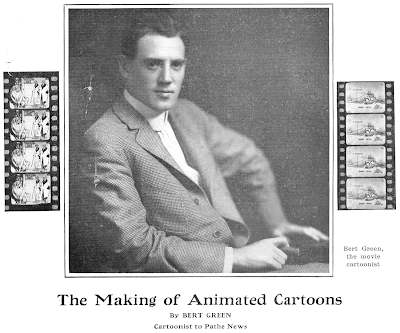 I have been asked a hundred times, “How is it done?”

The process involved is so complicated that it is difficult to explain intelligently because of the great number of parts to a “subject”; by this I mean the drawings, celluloid, tones, cut-outs, etc., and their relation to one another in order to complete a certain scene.

It must be borne in mind that film passes through the projector (of your pet theater) at one foot a second and that the cartoons you see on the end of a Pathé News run in length from fifty to one hundred and fifty feet. This means that if you should see a cartoon of one hundred and twenty-five feet it would be before your eyes just two minutes and five seconds; or in other words, you would have seen two thousand individual pictures, as there are sixteen pictures to every foot of film.

Now the fun begins. I have from two days to one week to draw that film if the editor wants that particular cartoon for a certain issue. This means that I have to “get over” an idea as elaborate as possible, as instructive or as funny as possible with as little technical work as possible, as the amount of tracing and camera work consumes all kinds of time. I have reached a point by experience that if I figure a cartoon to be finished under the camera by five o’clock, I am safe by just adding three more hours for luck.

For instance, a week ago I made a cartoon on “Prohibition,” in which I showed a street scene at night, and as you would look a block down the street you would see a man come around the corner, rush to the front of a saloon on which there was a sign, “Closed.” He then rushed across the street to the next, to find the sign, “Closed.” He did this all the way down the street, pausing and jumping before a half-dozen saloons, until he got to the foot of the street, or the foot of the screen, after which he went through several fool stunts before taking to the “water” that awaited him. I roughly figured I would have to make about one hundred and sixty drawings of the man as he came down the street, but before I had him up to the water faucet I had made about four hundred and fifteen drawings. The same thing happened in a “Zeppelin Raid” cartoon made recently. I had figured the aeroplane to catch up with the Zeppelin and bomb it from the top in about three hundred and fifty drawings, but before I was finished I had something like five hundred. So you see it’s no use making any engagements while in this business, as you might as well be serving a sentence in Joliet. I think that if an animated cartoonist had any time to himself he would go to pieces.

Cartoons like the “Katzenjammer Kids,” “Happy Hooligan,” “Mutt and Jeff,” etc., that run five hundred feet, require a staff of from fifteen to thirty people, men and women, to produce this amount of animated cartoon a week, with salaries ranging from ten to three
hundred dollars per week, so you can readily get some idea of the time and expense involved. Cartoons such as these contain from two thousand to three thousand drawings, and it takes two photographers one solid week working into the nights under pressure to photograph these drawings. 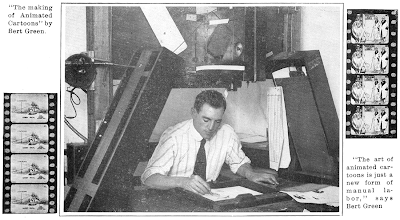 Since Winsor McCay invented the business and produced “Gertie,” which took him nearly three years, many short-cuts and inventions have been developed which save time, but I can truly say that there has never been a cartoon that could touch Winsor’s “Lusitania Disaster” for animation.

The most rapid animator in the game is Frank Moser. Moser literally shakes them out of a hat. I have seen Moser take a scenario of “Happy Hooligan” and in thirty days hand you a pile of between two and three thousand drawings that you couldn’t jump over and live through it. Yes, and catch the 5:15 for Hastings “nine times running.”

To explain the art, let us take, for example, one of the news reel cartoons like this: First we see a line gradually drawing itself across the screen to form the horizon line. This is done by drawing under the camera about a half-inch of line, then stopping and photographing, then another half-inch of line and photographing and so on until we have the line complete. Next we draw in a small part of Uncle Sam’s hat, then photograph, draw some more, etc., until we have Uncle Sam complete. Now we have Uncle Sam standing on the horizon line representing America. Immediately we start to draw the top of the Kaiser’s helmet, stop, photograph, etc., until we have Uncle Sam on one side of the water and the Kaiser on the other. Drawings are now made of Uncle Sam throwing a brick. The act of throwing the brick across the ocean may go into one hundred and fifty drawings, and when the brick strikes the Kaiser it changes to the Liberty Loan. In other words, the drawings are so made that the brick gradually changes into a huge block, which crushes him, and then the words “Liberty Loan” shape themselves.

This is a simple example, but when we go into scenes that contain two or more figures and which contain tones it requires endless tracing, and of my assistant, Miss Kelly, I cannot say too much, as she has the patience of Job. I think Miss Kelly has traced more legs, arms, hats, faces than there are fleas on a dog’s back, and believe me, that’s going some. And if it wasn’t for Miss Kelly I’d probably be selling canary bird swings at Forty-second street.

When a stack of drawings are finished we have a bunch of “paper actors,” and it is then a most difficult task to make them move at their proper speed. In short, you are the director. You take the “exposure,” for instance, of a man who walks across the room to sit down. These are all drawings of the man walking. Each drawing is from three thirty-seconds of an inch to three-fourths of an inch ahead of the last, and you then proceed to “expose” or direct his movements at your command. The drawings are then gone over carefully from one to a thousand, and the speed of each “paper actor” is listed on an “exposure sheet,” and the sheet, together with the drawings, are turned over to the camera-man to photograph.

An animated cartoon is photographed by “stop motion,” by which we mean one picture to one revolution of the crank instead of sixteen pictures, as is used exclusively in photoplay. This is one reason that makes it a time consumer.

Nearly all “trick photography” is done by “stop motion.” I took great delight once in watching two fellows making an advertising film in which the screen showed a knife come out of a drawer, the bread out of the box, the butter unwrap itself, the knife cut the bread, then spread the butter and a lot of other junk doing such tricks, all photographed by “stop motion.” These poor chaps had been working about two weeks, night and day, and at the time I saw them you couldn’t get near them. They had only about thirty-five feet photographed, and the sweet things they were calling each other, the knife, the bread, etc., was wonderful to me, as I could appreciate it. They were about ready for the “nut factory,” for they had to keep books on the movements of the knife, the bread, the butter, etc. For instance, they would move the paper on the butter one quarter of an inch, stop, photograph one picture, write down that, then move the bacon or bread another quarter of an inch and so on until the butter unwrapped, the knife cut a slice, etc. All this, mind you, was done in the “sky,” so the man moving the junk had to walk around in his socks for fear of soiling the “cloud.”

Unfortunately I am a glutton for hard work and long hours, but if somebody will only be good enough to induce the editor of the Pathé News to slip me the Croix de Guerre or the Legion of Honor for all the cartoons I made to kill the Kaiser and “Clown Prince” or “Crown Quince” I’ll buy him a drink before my contract runs out, because after the first of July we have to drink Jap-a-Lac.

In conclusion, an animated cartoonist must be able to talk English, Irish and Swedish, must know the Ten Commandments, the law of gravitation, locomotion and its uses, mind over matter, psychology and its action on cheese, the rules of the road, “cohesion” and its lifting capacity, navigation, a strong believer in Darwin, the art of tuning a
bass violin, the internal combustion engine and its use in the home, how to fry an egg, many innumerable things touched upon so lightly by our famous men and, above all, the animated cartoonist must have a one-track mind.