Stripper's Guide Bookshelf: The Misadventures of a Roving Cartoonist 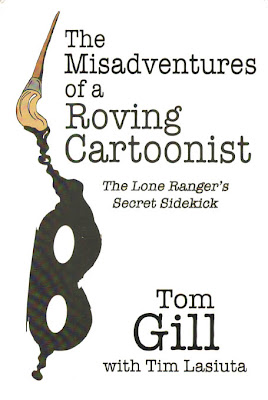 The Misadventures of a Roving Cartoonist -- The Lone Ranger's Secret Sidekick

The back of this book contains a 'comicography' for Tom Gill, page after page of art credits. Looking through that long list you can't help but wonder how this workhorse cartoonist had time for any adventures that didn't occur within a few feet of his drawing table. Obviously he was chained to the darn thing.

But adventure he did. Before Gill's recent passing he put together a memoir of sorts, an account that dwells mostly on his overseas tours to visit armed forces bases where he put on chalk talk shows for the troops. The stories of those trips are delightful, frank and wittily told. Gill had a knack for getting into interesting scrapes on these trips. He gets pinned in a car wreck, marooned in a blizzard, stuck in an air transport that runs out of gas and goes into a vertical dive. Some adventures aren't of the life-threatening variety, like the hilarious story of his encounter with a masseuse in Japan who is intent on selling him a 'happy ending'.

Although Tom Gill was primarily a comic book artist and therefore seemingly beyond the purview of the Stripper's Guide blog, he did have a syndicated strip for a few years ("Flower Potts" for the New York Herald-Tribune) and he discusses this experience along with a chapter about his days on the art staff at the New York Daily News. Also of interest to the newspaper comic strip fan are the capsule bios in the back of the book that provide background on the cartoonists Gill encounters in the rest of the book. Some of these are surprisingly informative with some insider information that I'd not encountered before.

Gill apparently wrote the chapters of this book over a long period and for different audiences, and certain episodes are repeated. Tim Lasiuta, who put the material together for publication, really should have done some editing to tighten it up. Instead he seems to have taken the tack that Gill's essays are sacrosanct; unfortunate but not that big a deal. Also in the minus column is the section of photos and Gill drawings -- the photos are badly reproduced and the original art is a miscellany of material that does not represent so much Gill's best work as what happened to be conveniently at hand when the book was being readied for publication.

These few problems aside, this is a delightful book that will make for a pleasant evening of reading by the fire on one of these cold winter nights. Being in Florida, I read it on a chaise longue basking in the sun, but we can't all be that lucky.

You can order this book at Amazon.com and give Stripper's Guide a little kickback on the purchase by clicking through on the Amazon 'recommended books' widget in the left siidebar of this blog page (you may have to scroll down a-ways).

Yes, we did largely leave Tom's writing alone. He passed away before the book deal was signed and his sight was shot so we kep true to his manuscript with some spelling and corrections. The stories no one could verify details and as a result, we used what we had.

It was fun to write and even better to see in print. This was his tribute and life for his grandkids.

As for the art. We used the best we could. Comic book art is tough to find from the books Tom worked on. And, I have only ever seen 1 example of original flower Potts art. His photos were scanned by Trish and we did not get to do justice to them.