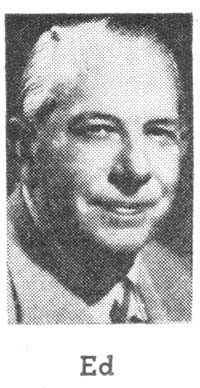 Carl Ed (rhymes with Swede, his occasional nickname) is now pressing 60 but still draws "flaming youth" with accuracy in the "Harold Teen" strip that he created 30 years ago. The Sunday color page began May 4, 1919. Teen is distributed by the Chicago Tribune-New York News Syndicate.

Ed speaks and draws from experience, having watched his only daughter, Donna Jean, and her friends at Evanston, Ill., grow through the teen age.

Daughter Wed 'Harold Teen'
The daughter is now married to Fred Reynolds, Jr., WGN continuity writer and the Harold Teen of WGN' s program, "Swinging at the Sugar Bowl." So Ed now observes his granddaughter, "the fourth generation of petticoat influence," for ideas for the future Harold Teen.

During the 30 years, Ed has coined or picked up many a term in use with the teen-agers. He popularized such words as "sheik" and invented "sheba" to go with it, dug up such mottoes as "Bored of Education" and "Squad Car" for the jalopies appearing in his strip. Once he had to do some research to concoct a recipe with his youthful friends, when he introduced a "gedunk" sundae in the strip. Requests for the recipe came in from all over the country.

Styles have changed, but the appeal is virtually the same as when Carl Ed worked out the strip with the cooperation of the late Capt. J. M. Patterson, then co-editor and publisher of the Chicago Tribune. He got the job with Patterson, whom he heard was looking for a strip about youth, after studying Booth Tarkington's "Seventeen."

Ed came to Chicago in 1918 as sports cartoonist for the old Chicago Evening American. He had been city editor of the Rock Island (Ill.) Argus, having first joined the paper as a cartoonist, then as sports writer. He was also drawing for World Color Syndicate, St. Louis, in his spare time.

The Poppa Jenks of the strip is from real life, a Pop Walters who ran a combination stationery shop and soda fountain across from Moline, Ill., high school, which Ed attended.

Carl's father had wanted to send him to art school, but he died when Carl was 13. Ed never attended art school until years later when he was an instructor at the Chicago Academy of Fine Arts. He insists that "other fellows draw rings around me" but his ability to draw "luscious armfuls" is one of the strip's chief appeals to the teeners. Most of the characters are from real life, incidentally.