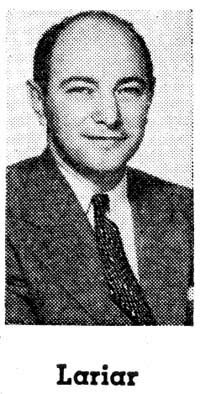 A job description of Lawrence Lariar would be pattern for most of the tasks in the production of comic strips. Few, if any, continuity writers bring as much experience and training to their work as Lariar. "Bodyguard," an adventure strip with a straight man, distributed by New York Herald Tribune Syndicate, is authored by Lariar with the sure touch of one who is both writer and illustrator.

Yet, the strip, which became a daily feature March 7 after running 10 months as a Sunday page, is drawn by John Spranger, 27-year-old war veteran, whom Lariar recruited from the comic books.

Lariar had 15 years of cartooning and illustrating when in 1942 he began writing. He is now author of 16 published books, has a serial in the current Liberty magazine, and is working on another book, "Careers in Cartooning," for Dodd-Mead & Co. He also is executive director of a professional school of cartooning in New York City.

"Bodyguard" has the plot of a mystery story, begins in India, is sprinkled with exotic and American beauties, and has a central character that's different — a saucy, precocious, fat child with enough on the ball to run a kingdom and a child's desire to play ball. It is a swift moving story, a vehicle giving scope to Lariar's broad background.

Cartoon editor of Liberty for the past seven years, Lariar began the Thropp Family there, first comic strip to run as a continuity in a national magazine.

As a free-lance (1930-1938) Lariar did advertising and direct mail cartoons, comic strips and spot drawings and contributed political cartoons to the New York Journal-American.

In 1935, Brooklyn-born Lawrence Lariar married his agent, Susan Mayer of Brooklyn. They have two children. Lariar says his wife was one of the first cartoon agents in the magazine gag panel field, and was a gag creator on her own.

Lariar's training began in the New York School of Fine and Applied Art. For the first six months he was on commercial illustration, then switched to cartooning. After graduation he started out with two buddies, Jack Arthur, now a school teacher in the New York system, and Adolph Schus, now a designer in fabric house.

The trio set up a cartoon agency in a flat in the 80's in New York, sold vignettes to College Life, for which the editor wrote two-line captions. They also got in America's Humor magazine, primarily because it couldn't pay as much as Life or Judge, says Lariar. Arthur, the oldest of the three (he was 21) would contact various outlets and say he represented a dozen different artists, which Lariar, Arthur and Schus tried to prove. One of their "artists" was named Baron de Shebago, who drew a full page of zanies.

In 1927, Lariar went to Paris on a scholarship to the school of dynamic symmetry. He was accompanied by Arthur. Later, the third musketeer, Schus, joined them. They went into the same routine in Paris, and did a big business with British magazines and Fleetway House, then one of the big magazine publishing houses of the world. Much of their work was for The Looker-On, which folded but paid off — fortunately for the sake of their fares back home. They did work, too, for Boulevardier, a Paris publication operated by Erskine Gwynn, an American.

The trio caromed back to New York in October, 1929, a few days after the boom had burst.

"To make a living, we did everything," says Lariar. "We had a service for printers, drew cartoons for calendars, played messenger and did some of the first work for the slicks."

Flushed with success, they then embarked on a venture that sank them. In Paris, Lariar had picked up a book reproducing the etchings of a Rembrandt exposition. The plates were excellent, and they had sold many of them to friends back home without any other effort than razoring them out of the book. Reproduction by a photographic process was expensive, and they moved in trade as slowly as coal buckets from a hardware merchant's shelves in the summer time.

"I still see them in shops around town," remarks Lariar sadly. "They're very good, too."

So the combine broke up, and Lariar rented offices on 45th Street where he turned to strip cartooning, drew some of the first comic books in 1933, and for Stuart Shaftell's Young America created "Inspector Keene of Scotland Yard."

He took the Walt Disney aptitude test in 1938 and went out to Hollywood briefly. Not liking the Disney factory approach, he soon returned to New York.

He emceed the CBS television show, "Draw Me Another," in 1947, and created the "Happy Headlines" show.

He is editor of a juvenile book publishing company, director of sketch units for hospitalized servicemen, and was president of the American Society of Magazine Cartoonists (1943-1946).

Among his writings is a winner of the Dodd Mead $1,000 Red Badge Prize.

He claims he has several hours' leisure time every day.

Comments:
I gather "The Bodyguard" must be "Ben Friday," the Spranger strip Lariar shows samples from in one of his books. Do you have samples? Also, do you have any idea if wife Susan Meyer is the same Susan Meyer whose credit used to appear on Dell Comics?

Susan Meyer? Didn't she move to some suburb? I alwyays wondered if he was the same Lariar who did all those 'best of' cartoon books and although it isn't mentioned, I guess that's him.

Ben Friday, aka The Bodyguard, aka Bantam Prince was covered back on this post:

And Lariar is indeed the editor of those Best Of book. Curious that they didn't mention them in this article.

Lawrence Lariar was my Grandfather. To answer your question Ger Apeldoorn, he was the same Lariar who edited and compiled all of the Best of Cartoons books. He edited the books for 20 years starting in 1942

Hi, this is a question for S. Lariar, the grandson. I have recently found in a state sale 2 small enamel paintings signed Lariar. I was wondering if your grandfather was also doing this kind of artwork as well as cartooning. They are very funny and with a sense of humor so I thought that he could be a possibility. Thanks in advance.

This is his other grandson, and yes he did do enamel paintings. Would be great to see pictures.