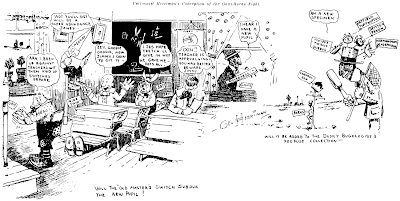 Friday, July 26 1907 -- A new inter-racial boxing match is announced, this one between relative newcomer Tommy Burns and powerful black veteran Joe Gans. The two had agreed to meet before in 1906, but the match never came off. Gans later said the announcement was purely a setup to bring the young Burns some attention from the boxing establishment. Just as the 1906 match never came off, this one in 1907 would end up misfiring too. Don't tell Herriman, though -- he's going to waste some ink doing several more cartoons about the upcoming affair. 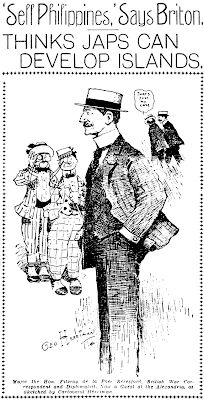 Saturday, July 27 1907 -- Some Brit going by the fancy name of Major the Honorable Fitzroy La Poer Beresford checks into an L.A. hotel and creates a bit of a stir. Seems he was mistaken for someone important (with a name like that, how could he not be?). Herriman and a reporter are dispatched to the scene, and the subject of the rumors humbly tells them that he is merely "a war correspondent and member of the British diplomatic corps".

So that the trip is not in vain the reporter asks for his views on sundry subjects. Among his pronouncements is that the Phillipines should be sold off to the Japanese and that the U.S. ought to invade and take over Baja California. The Major also tells the story of how his wife, child and best friend were killed in north Africa; he seems particularly sad over the loss of his buddy.