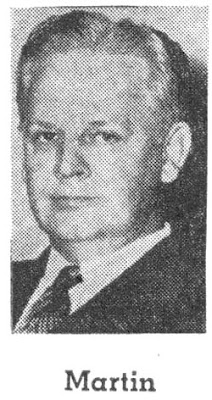 Change, the kind of wholesome change that marks a good life, has come to "Boots and Her Buddies," in the 25 years since Artist Edgar E. Martin first created her. NEA Service, the distributor, claims Boots is now syndicated to more than 500 dailies and half as many Sunday newspapers. When Boots celebrated her silver anniversary last week, she was still the star, yet little "Pug," the freckle-faced girl she brought home from a summer resort in 1939, is growing into something of a beauty, and a prime figure in the strip.

Boots began as one of four girls about town. Two of them soon dropped out of the community circle, leaving schoolteacher Cora and Boots. Cora remained true to type, married Professor Tutt. The Tutts boarded Boots, who became a glamour girl. She was successful in the role.

In 1926, after monied brother Bill gave her a trip to New York, she got a new haircut, the "Boots Bob," which clicked nationally with hairdressers. She was, in 1939, honored guest, in sketch form, at the Yale junior prom, and her glamour brought artist Martin several assignments as judge of beauty contests.

Boots Matured
Boots picked up a chum, Babe in these days, and they had a strong following among the students. But as the original audience grew older, Boots matured. She was courted by numerous swains. It's like ticking off calendars to recall their names — Ronald Ross, Prince Franz of Grandalia, Jonathon Marlsboro Jones, Handy Andrews, the wealthy Cecil Livingston, and Rod Ruggles.

Boots' audience had apparently reached a new stage when Ruggles appeared on the scene. They liked him. They sent a cascade of letters asking for wedding bells, and Boots and Rod went to the altar, Oct. 2, 1945. Boots became a family comic, and a baby boy was born, July 4, 1946. Out of a welter of name suggestions, Martin chose for the boy, "David."

Recently, Professor Tutt was ill, so Pug moved in with the Ruggles, and became an established member of the family when her father, long absent from the strip, was lost at sea. So it is legal now. From now on, Boots will have Pug's romantic adventures to remind her of her own school days.

As for Martin, who for many years lived in Cleveland, he now makes his home in Clearwater, Fla., still attends style shows and occasionally judges a "Boots" contest, but prefers spending the time with his wife and daughters in the Florida sun.

Martin landed with NEA in 1921 when he was 23. He drew several comics without much success until 1924 when NEA asked several artists to submit strips for a girl comic. Martin in off hours created Boots, submitted the idea, unsigned, and the board of judges picked her.
Before going to NEA, Martin's drawing was confined to sketches of salamanders, frogs, and grasshoppers, in his days at Monmouth (Ill.) College, where his father was a professor. He quit in his junior year to enter the Chicago Academy of Fine Arts.