Editor Thomas F. Costello, in a move to strengthen the Lowell Sun's influence, has added two political cartoonists to the staff.

The impact of these new Sun-styled cartoons these past three months has vindicated the Sun's move. Cartoons by the Sun's own cartoonists now decorate the offices of nationally-known legislators and Massachusetts state officials. The cartoons have become one of the strongest features of the Sun. They have brought state and local action.

The two cartoonists are nationally known. Frank E. Agar is a former stock broker, and Tom Flannery was a cartoonist for the overseas editions of Yank. 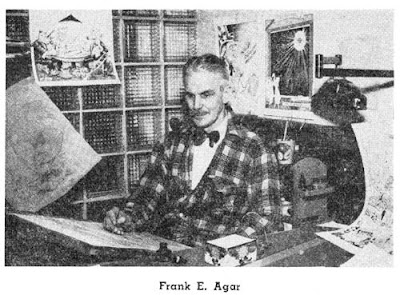 Agar, who was born in San Francisco, realized his lifetime's ambition to become a newspaper political cartoonist via an ad in Editor & Publisher.

Agar was a salesman and a director of security sales. For 30 years he lived and breathed the Wall Street atmosphere. He retired from the National City Bank in December 1947 and for nine months locked himself at home, working 16 hours a day drawing cartoons. He wanted to develop a style all of his own. When he had completed 50 cartoons, he ran an ad.

He is the father of four children — one of them, Frank E. Agar, Jr., is a freelance artist, while a daughter is a student at the Pratt Institute in Brooklyn.

After Agar was graduated from the University of California, he went to Wall Street to seek the proverbial fortune. While working for the National City Bank, he drew, at a banquet, excellent cartoons of Charles Mitchell and J. P. Morgan. When Mr. Mitchell saw the cartoons he was enthused, but "warned" Frank that he certainly couldn't be drawing cartoons while a securities salesman — the customers wouldn't take such "humor." And so, for 30 years, Frank Agar didn't draw any cartoons.

He doesn't know how he picked up the gift — he just studied the newspaper cartoons and sketched on his off moments. And so, upon retiring at the age of 59, he decided he wanted to become a cartoonist. 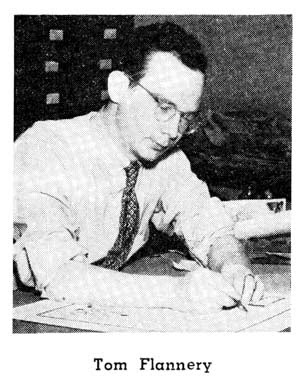 Flannery was born in December, 1919, in Carbondale, Pa. He was a "depression era" youth. He worked in the "bootleg" coal mines of Pennsylvania, always dreaming of an art career. Eventually, he started studies nights at Pratt. After three months, he quit and tried different jobs including distributing handbills in Brooklyn, auditing hotel books and similar chores. When World War II came, he was chief night auditor of the Hotel McAlpin.

In the army air forces, ground crew, armament, he indulged in his long-neglected talent for cartooning. Overseas, his barracks buddies prevailed upon him to submit a few drawings to Yank. He did and was offered a job as staff cartoonist, a job he held for two years, mostly in London.

Great website! I'm interested in Tom Flannery; do you recall where you found the photo of him? Thanks!