Strip Teasers: A Pair of Comics about Comics

Today we cover a pair of reprint books about a very special category of comic strips. 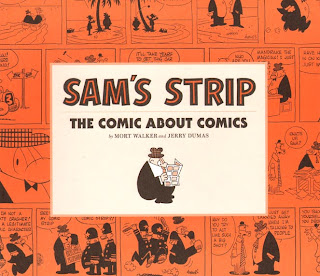 Sam's Strip - The Comic About Comics (Fantagraphics Books, $22.99)
When you think of avant garde cartoonists, chances are that the name Mort Walker never enters your mind. Mort's best-known strips succeed by sticking to the basics -- they are simple, well-drawn and funny. But there is more lurking in Mort's head than an endless string of beatings for Beetle Bailey. He co-created, with Jerry Dumas, one of the most delightful and intellectually daring strips that ever appeared in newspapers, Sam's Strip. For those unfamiliar with it, the strip concerns a fellow named Sam and his unnamed sidekick (much later known as Silo). These guys have a very unusual job -- they run a comic strip. Sam's Strip positively wallows in self-referentiality. Sam wracks his brain thinking up gags, he has arguments with the cartoonist who draws him, he has a closet full of sound effects to keep organized, he hires old comics characters down on their luck. This feature is the ultimate fan-boy fantasy -- a strip whose subject is the very thing we love best.

There have been "best of" reprintings of Sam's Strip before, but this volume reprints the entire run from first to last. What can I say except that it's about damn time. And Fantagraphics has done it up in a perfect package. The reproduction quality is top-notch, and they've given us a superb bonus -- a section of annotations by Jerry Dumas and Brian Walker. Dumas supplies us with some interesting reminiscences about the creation of particular strips, while Brian Walker gives historical context for the many strips with topical references. I am a BIG fan of annotations, so my delight with the book was doubled. Unbounded enthusiasm times two.

You see a lot of book reviews that say "your library should not be without it". Often that's utter malarkey. But I say in all sincerity that if you are a comic strip fan and you don't have this book on your shelf then there is something really wrong with you. Seriously. Go buy the book. Now. No really. Go! 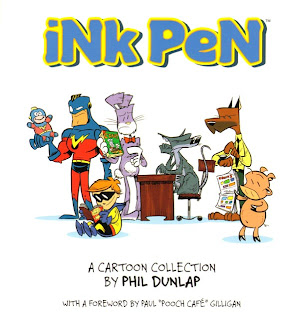 Ink Pen (Andrews McMeel, $12.99)
Based on description alone, Ink Pen sounds like a direct successor to Sam's Strip. In Phil Dunlap's strip an anthropomorphic dog and rat run an employment agency for out of work cartoon characters. However, these characters, unlike those in Sam's Strip, don't know that they're in a comic strip. The story is played out without the self-referential wall breaking that made Sam's Strip so unique. Ink Pen also eschews the use of comics characters from outside its own world. Rather than having well-known characters coming to the agency looking for work, this strip is populated with clients who are all the products of creator Chris Dunlap's own imagination. While there are occasional mentions of 'real' cartoon characters, Dunlap plays his plot straight with a cast of regulars headlined by a rabbit, a pig, and a reluctant superhero named Captain Victorious.

Since I rarely read comic strips online and my local paper doesn't carry Ink Pen, my imaginings about it being a successor to Sam's Strip were quickly disabused when I received this, the first reprint collection of the strip. Although I was disappointed that the strip fails to break the so-called 'fourth wall' as I expected from the description of the feature, that's a completely unfair standard by which to judge the strip. And judging it on its own merits, Ink Pen is good with potential for greatness. Dunlap has assembled an excellent cast of strong personalities, especially the lunkheaded Captain Victorious and embittered former child star Bixby the rat. The artwork is excellent, often enhancing the humor with deftly drawn facial expressions and body language. Where Ink Pen could use some improvement is that Dunlap doesn't trust the intelligence of his audience. His strips tend to be wordy, as if he's trying to explain his punchlines rather than just delivering them. Often the final panel has two characters delivering competing funny lines, a practice that dilutes the humor rather than enhancing it. Dunlap obviously doesn't trust his comedy instincts, which are spot on when he doesn't overthink things. If the strip is given enough time to mature I expect the creator will eventually get more comfortable in his own shoes. If Universal Press gives him that much time (and history tells us that UPS has a relatively short attention span compared to some other syndicates) I expect Ink Pen will blossom into a delightful and popular long-term success.

Dunlap would do well to study the Sam's Strip collection. Not only will he learn how to deliver a gag economically, but there are some great ideas for his strip lurking there.