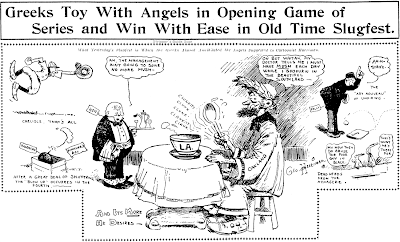 Thursday, August 29 1907 -- The Angels lose in a rout to Oakland. Herriman claims that the Oakland pitcher's 'mush' (spitball) was to blame.

August 30 and 31 1907 -- Herriman was tapped to do a series of cartoons about a rather odd subscription scheme at the Examiner. The paper offered a Craftsman-style easy chair at a low price to new subscribers. Herriman gave the cartoons just about all the attention they deserved (darn little, that is). He produced quite a few of these little two-panel strips but these were the only two for which I could get even a barely decent photocopy. The cartoons ran along the very bottom of page one, and the pages were very dark down in that region. 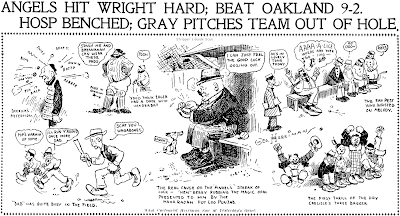 Saturday, August 31 1907 -- The most interesting part of this cartoon is the vignette about Angels catcher Bobby Eager wearing shin guards. New York Giant catcher Roger Bresnahan was the first to wear them in the major leagues in this year, and got kidded a lot for being a sissy. But obvious Eager was, er, eager to follow suit to save his aching shins, no matter the taunting he was sure to get from the fans and the press.

Comments:
Wow, so getting a subscription to the Examiner can not only get you a chair, but can change your life for the better and fix all your relationships. Sweet. Gotta get me one.